This is a fun story out of my "Ozark Animal Oddities" File. 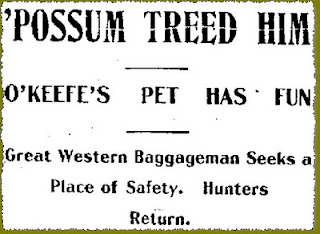 The hunting party composed of C. W. Mullan, O. C. Miller, M. J. O'Keefe and Ira Rodamar, with their dogs and traps are home from Missouri where they chased the wild turkey and deer for a couple of weeks in the Ozarks. With them they brought six fine turkeys and quail innumerable.
They are full of interesting, refreshing hunting tales of sporting life in the mountains and are entertaining their friends today. Although they enjoyed a deer drive, they did not succeed in locating any of the animals, and if their experience had been like that of two sportsmen who followed the same trail the next day, it is well that they didn't. Two men standing on either side of a deer which they discovered fired with the result that one was killed instantly.

Mr. O'Keefe never returns from a hunting trip without a memento of some kind. This time it is a real live 'possum which he chased up a persimmon tree and brought back to show his friends. The night of their arrival home the sportsmen were roused from their slumbers on a Great Western train and were hurriedly summoned to the baggage car where they found the baggage man perched upon a trunk with the 'possum eying him ferociously and at the same time watching the excited dogs which were prowling about the car. After the animal was again caged, and the canines subdued, the cause of the trouble was sought but. The ‘possum had clawed off one of the slats of his cage and escaped into the car. One of the dogs woke up and made a lunge for it but the briefness of the chain which held him caused him to swing about and land squarely on the person of the baggage man who was drowsily waiting for the next stop. The man opened his eyes and beheld such a spectacle as would cause anyone to seek a place of safety, which he did and summoned help.

Another interesting thing in connection with the trip is the weaving off of the ends of the dogs' tails.

This was the result of switching them too industriously among the briary underbrush o£ the Ozarks. The dogs down there don't do that way, but these didn't know any better.

Here’s another short article form my “Ozark Moonshine Chronicles” with Ozark County, Missouri, as its’ focus. It was a dangerous time for someone with a badge. The year…1876.
Enjoy. 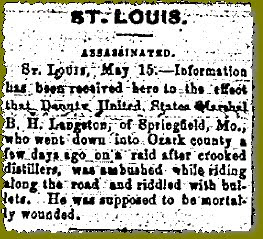 ST. LOUIS
_______________
ASSASSINATED
St. Louis May. – Information has been received here to the effect that Deputy United States Marshal B. H. Langston, of Springfield, Mo., who went down into Ozark county a few days ago on a raid after crooked distillers, was ambushed while riding along the road and riddled with bullets. He was supposed to be mortally wounded.

I have different Ozark files & subjects stacked on my desk. One that I have been compiling is entitled, "Ozark Moonshine Chronicles." I will post these every so often.
I found this article in three different newspapers with three different titles...dated 1878. Below is one of them.
Enjoy. 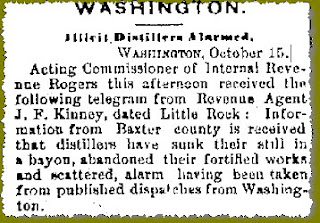 Washington, October 15.
Acting Commissioner of Internal Revenue Rogers this afternoon received the following telegram from Revenue Agent J. F. Kinney, dated Little Rock: Information from Baxter county is received that distillers have sunk their still in a bayou, abandoned their fortified works and scattered, alarm having been taken from published dispatches from Washington. 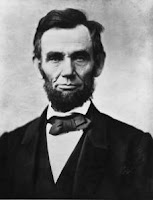 A little over a year and a half ago, I had the opportunity to be a part of writing a grant to the National Endowment for the Humanities for a $50,000 grant. This grant will enable the winners to be placed on an exclusive tour entitled: “Lincoln: The Constitution and the Civil War.”
The tour was to be awarded to 25 libraries in the United States selected to host the traveling exhibition, which was organized by the National Constitution Center, Philadelphia, and the American Library Association (ALA) Public Programs Office, Chicago.

Well, the grant was submitted a year ago February. We knew we had a killer proposal; we had a great team at the library working on the grant. But nevertheless, it looked as if our attempt was futile, and it was lying on fallow ground.
Ahh…but things change. In March of this year, we had our award letter. At times, it has been hard to contain my joy.  But life goes on. Therefore, I will be gone this week to the National Constitution Center, in Philadelphia, this week to train as the director of this project. I believe this will be a great opportunity for our region to have an exhibition of this magnitude. I have contacted guest speakers who will lecture concerning our region during the Civil War. Best of all, it will be housed in the new Donald W. Reynolds’s Library in Mountain Home, Arkansas.

The date of the tour will be September 26 – November 9, 2012. I know that may sound like a long time in the future, but scheduling activities, speakers, school/classroom tours, and other Civil War displays for 42 successive days...the timing is perfect. It will fall after the Baxter County Fair and Ozark County's Annual Hootin & Hollarin. I realize Yellville's Turkey Trot will probably during the first week. In addition to the timing, we will be settled in our new Library and ready to handle the crowds. If you are a teacher, parent, or someone who loves our country, etch this date in your memory and make plans for a visit. 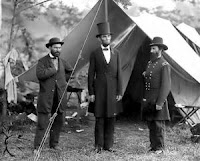 This will be a 6 week exhibition that will tell the story of Abraham Lincoln’s struggle to meet the constitutional challenges of the Civil War. This traveling version explores Lincoln’s struggle to resolve the basic questions that divided Americans at the most perilous moment in the nation’s history: Was the United States truly one nation, or was it a confederacy of sovereign and separate states? How could a country founded on the belief that “all men are created equal” tolerate slavery? In a national crisis, would civil liberties be secure? President Lincoln used the Constitution to confront the secession of Southern states, slavery, and wartime civil liberties. Lincoln’s decisions about these three intertwined crises of war reinvented the Constitution and the promise of American life. I believe this exhibition develops a more complete understanding of Abraham Lincoln as president and the Civil War as the nation’s gravest constitutional crisis.

This exhibit is based upon an original interactive exhibit developed by the National Constitution Center. Hopefully, you will be able to visit and see what is happening. So, start making plans and find your old 1860 duds. While you’re there…drop by my desk and see me.

Any Questions???
Email Me.
I'll get back with you next week.
vincent.a@baxtercountylibrary.org
Posted by Ozarks' History at 11:25 AM No comments:

Times have changed in respect of how we look at each other. This is an article that was published about 102 years ago in praise of the silent & virtuous ladies that have graced our area. I have let others read the following article. Hither unto, I have received the range of comments of scoff& chagrin to the silent & affirmative nod of approval. Like it or distain...it's all a part of our Ozarks' History.
Happy Mother's Day
Enjoy.

Women.
In the general run of newspapers you see very little there about women. Good farmers are lauded for the raising of big, fine crops, statesmen are praised for their acts in the welfare of the state and country, business men are praised and talked about for their large volumes of business and clean methods. But do you ever hear of a woman? Scarcely, and when you ever hear it is generally about some divorce suit of some of the 400 in the East or in a joke column. In the country papers very little is said in a news way about women, they are thrown to the background. This is largely due to the fact, that men are better known and come to town more often. Now we want to say something of the woman of Baxter County, bless them, and of their work that one seldom hears mentioned. She has several cows to milk, chickens to look after, meals to get, dishes to wash, beds to make, and all her household duties to attend to, and she has to keep things in good order or her husband will kick up a rumpus and some of the other women will talk about the dirty way she keeps a house. Look around and see the fine boys and girls growing up that are going to make our citizens when you and I will not be fit for anything but to piddle around in the garden and sit by the fire. She is the one who watches them grow up day by day and guides them along the right path, sympathizing with their hurts, burns, and heartaches. Do they get what is coming in words of encouragement and praise that they should? We do not think so.

Nobel Endeavors…Wet Alternatives in the Winter of 1888

Eighteen young men of Mountain Home, Ark., swore off the tabacco habit on the first of the present year. Whoever returns to the habit is to be ducked in a pond of water.
Work Cited:
"Curious Things of Life." Olean Democrat  9.11 (09 February, 1888) 2. Access Newspaper Archive. Baxter County Library, Mountain Home, AR. 1 Dec. 2009. http://www.access.newspaperarchive.com/.
Posted by Ozarks' History at 8:48 AM No comments:

At Mountain Home, Ark., a band of mounted and armed men broke into J.A. Talbert's store, robbed the safe of several thousand dollars, set fire to the store and blew it up with gun powder. This aroused the citizens, who saved the balance of the town from burning up. The robbers escaped.
Work Cited:
"A Bold Game." Hutchinson News. 9.48 Thursday, (02 June, 1881) 6. Access Newspaper Archive. Baxter County Library, Mountain Home, AR. 1 Dec. 2009. http://www.access.newspaperarchive.com/.
Posted by Ozarks' History at 8:33 AM No comments:

This story comes out of my “Tragedy in Death” File.

LITTLE ROCK, August 15.—News reached here today that the body of a man supposed to be John Shorts, accused of poisoning his wife, had been found hanging to the limb of a tree at a point just across the Arkansas line in Ozark county, Mo. Shorts had been living in Searcy county, Ark. some days ago he disappeared. His house was searched and the dead body of his wife found, death having been caused by poison, as is generally believed. A party of men started after Shorts, bent on lynching him. Shorts came to this state from the Indian Territory, where it is said he killed a man.