Nothing may seem significant about that date...or today's date.

But when death is involved, one tragic day can alter circumstances perpetually.

Death is inevitable; it comes to us all. For some, the stoke of death's hand is swift and far too early. To others, it is a slow process that erodes our strength and vitality. It is hard to say goodbye to those that leave us here in the present; yet, leaving is something we all shall do. Death is something my family has always taught me about in preparing my heart for eternity. It is a daily walk & relationship with my father in Heaven that I may have the hope of not just seeing Him, but I look forward to bow before Him in his presence.

As this year comes to a close, many families look forward to seeing each other as another collective whole. Yet, swift & an expected tragedy often hastens family members together to mourn the loss of one of their own.  This was the case with the a family 111 years ago in Ozark County, Missouri. We will now journey into the lives into one of the pioneer families of the Ozarks for a glimpse of how life brings about the unexpected to the Lewis Collins family.


Lewis and Alice soon began to have a family. Over the years, finding employment to take care of a wife and their four children became a focal point, not only for Lewis, but also other men in the Ozarks. By 1901 the news of the railroad  building a thoroughfare along the White River gave hopes to many families of better days of commerce & transportation. Additionally, men were finding work along this route, and many brought their families in tow. One of these places was Cotter, Arkansas.


The newly formed Red Bud Estate Company formed a plan to establish the railroad/boom town of Cotter, Arkansas.  Economic prosperity had started to bloom in the Ozarks on the White River and the newly formed company began selling lots along the river. Cotter soon became the main hub of growth & ingenuity. Finding housing became problematic, and many men and their families moved into tents. Lewis Collins and his family moved to Cotter and lived in a tent at the railroad camp.

Many locals were in the business of cutting railroad ties and flooding the White River with their newly cut timber. Doctors, dentists, and just about every kind of imaginable businessman or merchant had the fledgling town in their sights.

As the railroad progressed from Batesville and Calico Rock, Arkansas, another main construction project was underway. This project was the building of the railroad bridge across the river at Cotter.

As with every great dream of construction went, it was the usual expectation that accidents would occur. 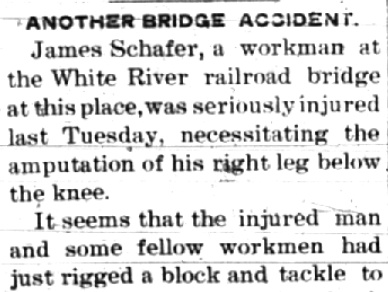 Another Bridge Accident.
James Schafer, a workman at the White River railroad bridge at this place, was seriously injured last Tuesday, necessitating the amputation of his right leg below the knee.


It seems the injured man and some fellow workmen had just rigged a block and tackle to pull an engine up the river bank to load it on the cars. When the hoisting engine strained on the line, the hook in the snatch-block broke or gave way, the block and line catching Schafer with the result that his ankle and both tibia and fibula bones were badly crushed. Drs. Hall and Cannaday were called and decided that it was necessary to take off the leg and amputation was accordingly made.


Mr. Schafer is married and has three children. At last account he was resting easily in his tent east of the Courier office.
End of Article

As the work on the bridge progressed, families were finding time to go back "home" to keep in touch with friends and family.

Traveling between Cotter, Arkansas, and Gainesville, Missouri, became common place for many Ozark families, including the Lewis Collins family.

As the Collins family said goodbye to each other in September, 1903, they didn't realize it would be their last farewell. On December the 11th, 1903, Lewis met with tragedy. 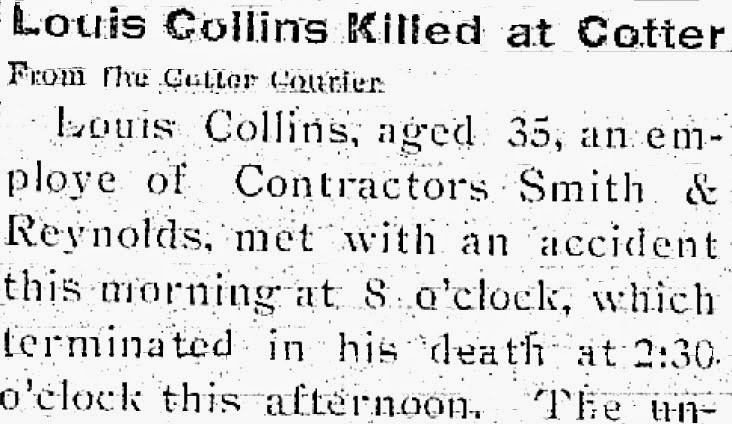 
His Head is Crushed By A Falling Box,

Louis Collins, who formerly lived near Gainesville, and who has been at work on the railroad bridge across White river at Cotter, Ark., for several months, was killed last Friday while discharging his duties.
Louis was signalman on the top of the high piers, a very dangerous and important position to hold. He had held this position for some time and understood his duties well and was one of the few trusted employees of the Camp. It was his duty to give the signals to the engineer to start or stop, raise or lower the concrete box in and out of the pier. On Friday morning about 8 o'clock he gave the signal to raise the box out of the pier after the load of concrete had been deposited in the pier. The box went up with such force that when it struck the carriage castings on the cable above it rebounded with force enough to break the rope which held it in place, and the box fell about 32 feet striking Collins on the top of the head, crushing the skull horribly. The body then fell from the pier into the coffer dam below, a distance of 42 feet. In the fall he struck a 2 X 6 standing on the frame-work breaking and mangling the bones of the right hip and upper thigh; and lodged on another cantling at the surface of the water in the coffer dam.
The body was taken out in an unconscious condition and removed to his home near by. Three physicians of Cotter and one from Mountain Home were summoned and a surgical operation was performed, and everything known to medical science was done to save the man's life, but all to no avail; the patient died at 2:30 o'clock Friday afternoon, having lived over six hours after the accident.
The body was prepared for burial and on Saturday was brought to the home of J.W. Collins, a brother to deceased and interment took place late Sunday evening at the Gainesville cemetery. Deceased was 31 years of age and leaves a wife and four children.
End of Article


Louis Collins, aged 35, an employee of Contractors Smith & Reynolds, met with an accident at 8 o’clock, which terminated in his death at 2:30 this afternoon. The unfortunate man was performing his duties on top of pier No. 11, when the mortar box suspended from the cable overhead fell, striking him on the head, and throwing him a distance of 40 feet into the water below. He was taken out in an unconscious condition and removed at once to his home at this place, where Drs. Hall, Morrow, and Cannaday performed an operation, with the hopes of saving the man’s life. Dr. Tipton of Mtn. Home was also summoned and all the doctors worked hard but to no avail. The dead man leaves a widow and four small children to mourn. His remains will be forwarded tomorrow to his former home at Gainesville, Mo., where interment will take place.
End of Article

As I began putting the pieces of this story together, there were some things that became hauntingly familiar to me. Lewis Collins was raised in Mammoth, Missouri. Actually, he grew up and was raised on the same plot of land I was raised on. He must have known Lick Creek and Possum Walk Creek, the same places I know. We both have probably walked the same fields, trails, and hollers. His parent's tombstones in the Mammoth Cemetery have always been a familiar sight to me all my life.

This past week, I sat on the banks of the White River and gazed at the concrete columns Lewis helped construct. I have studied the precipice he was knocked off of. This past week, I walked by and glazed at his tombstone, and I realize I didn't know even part of the story that lied hidden. As I have pondered this story, I have begun to look back and take account of who I may have neglected. Where have I fallen from?


In the weeks following the death of Lewis Collins, not only family was concerned about the welfare of their own, but the community was too. The next week John C. Harlin made a special business trip to Cotter to check on Alice Collins. The way to Cotter from Gainesville in 1903 was not a quick 45 minute drive, but it was a rough road that was traversed with potholes.  A month later, local attorney Guy Harris went to Cotter and started investigating the wrongful death of Lewis Collins.

This is one of the lessons I have relished over the past month in researching this story.

Gainesville wasn't just a town. It was, and still is, a community.

It's not buildings. It's people.

I believe that we, today, run the risk of being too busy to notice those around us. Do we know our neighbors? Do we care to take time and make sure those in need know somebody is there for them or praying for them? I try not to play the role as a pessimist, but I believe I see telltale signs of crumbling of society. It can begin to grow like a small cancer cell. First, we think everything is alright because we have no symptoms. Secondly, we deny the symptoms. Thirdly, we mask the pain with medications. This is the most dangerous step to death. Many times we assume the absence of pain and conclude we are not dying.

Let us not deceive ourselves in believing that we are perfect because we do not feel the pain of our neighbor. Pain may be masked today by a myriad of things, including technology.

A lot has happened in the past 111 years. Today, some tout the moniker of giving Hope & Social Justice. But, if we truly are a neighbor, we will look about us and work to restore our community we have been so greatly blessed with. May we set aside our predispositions, judgments, and prejudices, and let us restore our foundation of community that was lived in the past of our Ozarks' History.


You may visit the gravesite of Lewis Collins by clicking here.