St. Louis, Missouri, January 17, 1871.
Sir: I most respectfully submit herewith the report on the condition of Black River, in the State of Arkansas, compiled from field-notes of Captain John S. Tennyson, who made the examination of that stream under instructions and supervision of Mr. A. Livermore, civil engineer, my predecessor in charge of river examinations.
Black River is a tributary of White River, heads in the southern part of Missouri, and empties into White River half a mile above Jacksonport.
The examination of the river was commenced at Pocahontas, the head of steamboat navigation, and conducted from that place to the confluence with White River, a distance of one hundred and fifty miles.
This work was done under the most favorable circumstances, the river having been at the lowest stage of water known for a number of years, according to information from people inhabiting that section of country.
The river traverses, in a winding course, low bottom-lands, which are subject to overflow during high-water season. It has very short turns and bends, and forms a succession of pools and shoals.
The average width between banks is 275 feet. The width of the channel in the pools is 75 feet at low water, with from 6 to 8 feet depth, while on the bars and shoals the narrowest channel is 33 feet wide and 27 inches deep.
The principal shoals and bars are located by distance from Pocahontas. Their location and condition are exhibited in the following table: 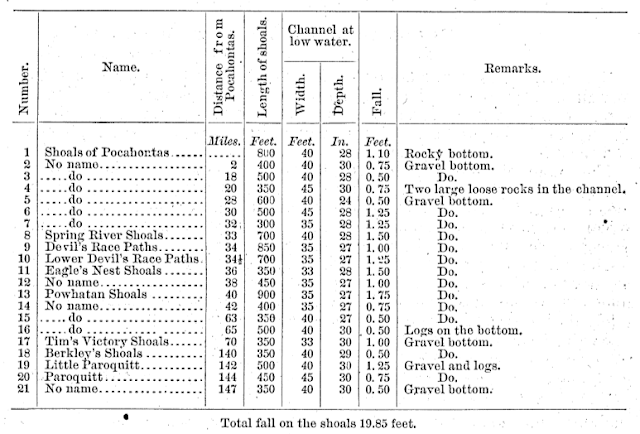 The fall in the pools is about 2 inches per mile, which, added to that on the shoals, will give 35 feet fall for the river from Pocahontas to the mouth. The current in the pools is very slight, and averages about one mile and a half per hour.

Obstructions, Snags, and Wreaks.
Leaning timber is very abundant, amounting to the number of 11,936 trees, 8,241 of which are less than one foot in diameter; 2,989 from 1 to 3 feet; and 706 over 3 feet in diameter.
The number of snags lying in the river is 2,019, of which i,189 are classed as shore snags, that is, such as lie close to the shore which is next to the channel.
There are also two steamboat wrecks in this river, which, being directly in the channel, are considered very dangerous obstructions. They are the wrecks of the W. F. Brooks, opposite Jefferson City, lying across the channel; there is hardly room enough for boats to pass. Wreck of the Fairy Queen, in Fairy Queen Bend, one hundred and eighteen miles below Pocahontas, lying in the middle of the channel.
Owing to the narrow channel, and general character of the river, it will be necessary in improving it to pursue a method differing from that pursued in Lie improvement of the Mississippi River. Nearly all the leaning timber after being cut, and all the snags and stumps, will have to be deposited, either on the shore, or on the shore bars below the points. This will require a snag-boat entirely differing in construction of hull and machinery from those now used on the western rivers.

General Remarks.
The improvement of Black River is of immense importance to the country which is traversed by that stream. The interior is very fertile and mostly cultivated in cotton. , The population of this district depends entirely on the navigation of the river, both for shipping off the produce and for procuring the supplies for the necessities of life. The dangers of navigation, caused by the present condition of the river, allow but very small boats to run, and that only in daylight, it being too hazardous to run during the night, especially in low water.
When clear of obstructions Black River will be a better stream for navigation, than White River is from Augusta to Jacksonport, and it will admit, during high-water season, the large boats that are running in Lower White River, whenever the stage of the water in the latter is such, that the can reach Jacksonport. It will, once cleaned out thoroughly, require no more expenditures for a number of years, and remain, having no caving banks, a natural canal.
I am, most respectfully, colonel, your obedient servant,
Justin Straszer,
Civil Engineer.
Lieutenant Colonel W. F. Raynolds,
Corps of Engineers, U. S. A., St. Louis, Missouri.
References:
1871 Chief’s Annual Report of the Chief of Engineers to the Secretary of War for the Year 1871. Page 374 – 376. Government Printing Office, Washington D.C. https://usace.contentdm.oclc.org/digital/collection/p16021coll6/id/1832. Accessed 07 July, 2019.