I came across this small article from an old newspaper in Tennessee which talks about a founding father of Baxter County, Arkansas, Col. Randolph DePriest "Ran" Casey. His historic house still sits on its original foundation by the Baxter County Fair Grounds.

Mr. Casey was a lieutenant in a Battalion of Tennessee Volunteers commanded by Major Julian & Capt. Rufus P. Neely in the War with or Removal of the Cherokee Indians from the states of Georgia and Tennessee in the year 1838.


This article offers a brief glimpse at our Ozarks' History. 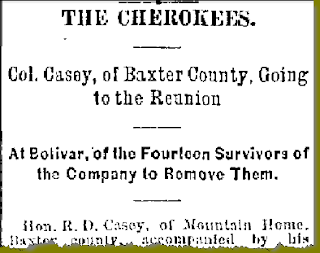 At Bolivar, of the Fourteen Survivors of
the Company to Remove Them.

Hon. R. D. Casey, of Mountain Home, Baxter County, accompanied by his nephew, Judge J. F. Russell, his daughter, Mrs. Paul and Mrs. Hicks, and granddaughter Miss Katie Hicks, arrived Sunday and left last evening for Bolivar, Tenn. Mr. Casey is one of Arkansas’ best citizens, and was an honored member of the of the legislature soon after reconstruction.

Mr. Casey stated to a reporter of THE GAZETTE that a reunion of his company, organized for the removal of the Cherokee the 8th of May, 1838, to their present quarters in the Indian Territory, would be held this week at Bolivar, “their removal, “ he continued, “took place forty-five years ago this month.

Who commanded your Company?”

“Our battalion was commanded by Major Julian, and Capt. R. P. Neely of Bolivar was in charge of the company. I was the first lieutenant, but I cannot remember the other officers.

“Do you remember how many men in your company?”

“Yes, 104, and all but fourteen are dead. The fourteen, however, will all answer at roll call this week. Ninety are dead.”

“Where were you mustered into service?”

“At Calhoun, on the Tennessee river, by Gen. Winfield Scott. I remember we marched down to Ross’ Landing, now a flourishing city of Chattanooga.”

“Did you have any fighting with the Cherokees?”

“None at all. They at first refused to go, but they saw we were in earnest they went peaceably enough.”
End of Article

Posted by Ozarks' History at 4:53 PM No comments: