Dr. Brooks Blevins’ A History of the Ozarks, Volume 1: The Old Ozarks. 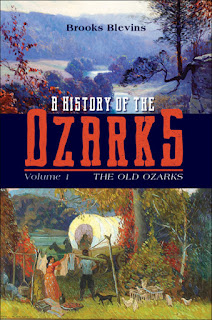 Every so often a manuscript is written that easily swizzles across every expectation and whets the reader’s appetite for the next volume. Working in a library, I hear these sentiments echoed every so often from bibliophiles who extol the virtues & prowess of authors of fiction. Yet, it’s not as often that I chance across the path of a reader of nonfiction or history scholar who lauds similar accolades. Brooks Blevins’ The Old Ozarks, Volume 1 of a new Ozark history trilogy, is one of those works that has not left the reader or student of Ozarks’ history in the pale, but it has delivered to this reader’s expatiation. For anyone who loves the Ozarks, a commitment to purchase this volume should be an easy decision so one can highlight, markup, and scribble notations on the pages inside. While reading through his first volume, I was reminded of Elmo Ingenthron’s Ozark trilogy.
In Blevins’ first paragraph of Chapter 1, “The Primitive Ozarks,” his small treatise on “rabbit ice” quickly had me transported to a frosty Ozarks’ morning, gently breaking off garlands of ice, and biting into the earthy tasting ribbons. (If you haven't dropped down on your belly and nibbled off a frozen ribbon, make it a point to commune with nature in this time-honored winter oblation!) After reading through the next five chapters, I was not disappointed.  This chapter takes the reader through ages & changes that transpired with ancient ocean coastlines, tectonic shifts, and regional uplifts over the ancient millennia. With these facts in hand, we can understand our geologic & karst topography composed of limestone, dolomite and “chert.” The chapter’s narrative chronicles the Paleo-Indians, Dalton, Archaic, and Woodland sojourners, along with the Ozark Bluff-Dwellers, who roamed the prairies, woodlands, and the Ozark Valleys...rather than the Ozark hills. For further explanation on the difference of the latter, you’ll have to read page 14. Additionally, this section details a different Ozarks than we know from today, and  the “former inhabitants of boreal forest” testified to a region populated with “spruce, fir, and jack pine supporting such large animals as the horse, muskox, giant beaver, and even the mastodon.”1

Though the Ozarks’ Region may cast a wide net geographically, I believe Blevins’ “Natives & Newcomers,” Chapter 2, is one of his best chapters. Blevins weaves together the history of the Native & Transported Tribes into the Ozarks; all the while, he interlaces how explorers Thomas Nuttall and Henry Rowe Schoolcraft fit into the narrative along with Gov. Crittenden’s & Izard's perspective (to name a few). This chapter aptly details the Native American Nations and their wars along with the Osage Decline & Cherokee Ascension in the Ozarks. Furthermore, the latter part of this chapter has causes me to look back again at Arkansas Territory Gov. Izard and the events that transpired in the Arkansas Territory. Blevins references important excerpts and events in his book during this era which are relevant for historians pause and re-examine the views & conflicts transpiring in the Ozarks. For example, on page 63, Blevins references The Territorial Papers of the United States. Vol. 20, 1825-29, and I am offering an excerpt here as a teaser for historians and readers to realize the dynamics transpiring at this time:

“Reflecting on the excitement in the White River valley a couple of years later, Arkansas territorial governor George Izard interpreted the gathering of the immigrant nations as both a plan “to exterminate” the Osages and a general insurrection among the “Savages west of the Mississippi.” 2
This era of history is rarely discussed, but it’s full of relevance.

Personal Opinion:
Currently, it seems this period in history is not elaborated as much as other illustrious times like the Civil War or Reconstruction. It's possible that this could be attributed partially to the recent celebration of the Sesquicentennial Celebration (150 years) of the Civil War, and it has overshadowed this era. Additionally, I believe the lack of discussion may sometimes stem from the deficiency of popular scholarship because documenting the dynamics of ethnic groups and events seems to spur racial tensions in today's society. These dynamics are not something to be swept under the rug under in the guise of political correctness. American historians & citizens need the intellectual freedom to discuss these issues and savor the lessons garnered. Nevertheless, I’m glad Blevins details these significant elements in the first part of the nineteenth century.

Back to the Review:
In “Americanizing the Ozarks,” Chapter 3, Blevins takes the reader along the ancient traces of the Ozarks. These proto-Ozarkers forged an Antebellum-American culture whose unique flavor of the Scotch-Irish whose roots is still traceable today. Important vicinities, to name a few, are giving credence such at the old Looney Tavern and Davidsonville along with ferries, bayous, trading posts, and blacksmith shops. Blevins synthesizes Dr. Billy Higgins’ book,  A Stranger and a Sojourner: Peter Caulder, Free Black Frontiersman in Antebellum Arkansas, in which Free Blacks and mulattoes were among the ethnic groups inhabiting the Ozarks. Additionally, Blevins intertwines a wide cast of ethnic groups migrating to the Ozarks bringing about a cacophony opinions, and loyalties scattered throughout a region. Additionally, there is little doubt that politics & religion held a huge sway over the Ozark amalgam. Well, fear not; Blevins does not disappoint on these issues.

Religious unity & camp meeting revivals in the Ozarks grew out of the Second Great Awakening. Eventually, local pastors fretted over the members of their congregation. Of the memorable quotes parlayed in this section, Blevins served an eloquent appraisal that smacked of sectarianism evident of the era as one Methodist minister reminisced over the Baptist practice (of course): baptism, “A few of our sheep were stolen, put under the water, went in and came out, no better in faith or practice.”4  Among the religious fracas, Blevins weaves together the agitation affiliated with the Hardshells, Campbellites, Mormons, and the Catholic/anti-Catholic sentiments. Similarly, an important caveat is also addressed giving credence to the temperance & prohibition movement as it began to hold sway in the region.

If spiritual & disorder-order wasn’t enough in the righteous assembly, the details of Violence, Discord, and Feuds are brought to bear on the hearts and backs of the noble hillfolk in the Ozarks. Blevins lays substantive groundwork on the Cane Hill murders and those who donned white caps & phantom hoods in the Slicker Wars. Additionally, a political debate erupting into hostilities that divided neighbor against neighbor, adds substantive reasoning for the Marion County, Arkansas, hostilities. This feud propelled the Tutt & Evert War, and it brought about the Arkansas governor to order the state militia to simmer down the embers of the melee.

If the evils of man’s heart weren’t enough, the role of slavery in the Ozarks is given its due credence. Blevins elaborates on the evidence that this practice was more palpable in the river valleys and the peripheral counties of the Ozarks than on the rocky ridges and prairies of the hinterland. Additionally, he lays evidence that slavery was more prevalent and socially accepted as a norm across the region. Within this section of Volume 1, Blevins hints that the influence of slavery in the Ozarks will be expanded in the next volume of his trilogy, The Conflicted Ozarks: Volume 2.
I can’t wait.

Do I like this Book?
Folks, if you can’t see by now down which trail we're going, I’d suggest you take the blinders off and enjoy the view. To cap off this review, Blevins throws in 40 pages of Notes to the Chapters and a 13 page Index that makes it worthy enough to rip out and tote in the front bib of one's overalls. For all misconceptions attributed to the Ozark region, Blevins assists in setting the context to understand the nuances and peculiarities of the Ozarks. This first volume has set a standard of readable and usable history. Most importantly, Blevins weaves a historical narrative of engaging scholarship that is not written in a high academic language, but it is a palatable narrative that should become a primer for those who are new to this field of history and a standard to the natives who can trace back their heritage to the Old Ozarks. 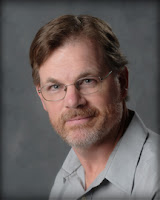 Brooks Blevins is the Noel Boyd Professor of Ozarks Studies at Missouri State University. He is the author or editor of eight books, including Ghost of the Ozarks: Murder and Memory in the Upland South; Arkansas, Arkansaw: How Bear Hunters, Hillbillies, and Good Ol' Boys Defined a State; and Hill Folks: A History of Arkansas Ozarkers and Their Image.