Some days, or months, or years seem to end with a sour note. Sometimes, we can foresee circumstances countering in a direction we no longer want to endure.

In 1869, precocious times like these countered on a gentleman named Mason Simpson. Capt. Mason worked for the Freedmen's Bureau in the little hamlet of Union, Fulton County, on the Upper White River region of Northern Arkansas. Union is located north of Oxford on Arkansas Highway 9.

Simpson thought he thought he might find better circumstances & greener pastures in 1866. 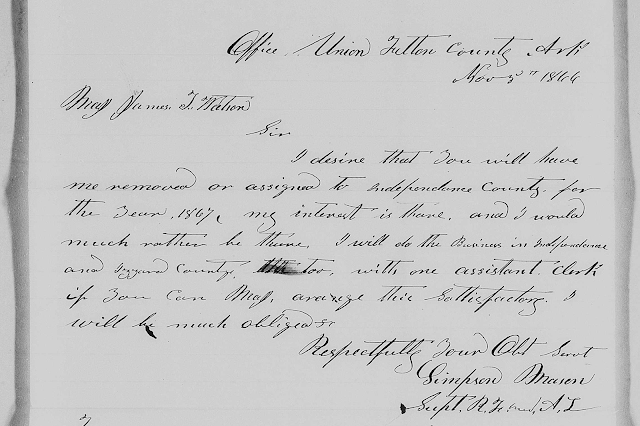 Nevertheless, circumstances turned awry and Simpson is murdered on September 19, 1869.

How did it happen?

A few years back, Dr. Brooks Blevins gave a lecture at the Baxter County Genealogical & Historical Society entitled, "Murder, Mayhem, and Northern Arkansas's Civil War that Refused to End." Dr. Blevins gives a great view of circumstances surrounding the murder of Mason Simpson in Northern Arkansas during the Reconstruction Era.

Dr. Blevins writes a great article in the Arkansas Historical Quarterly corresponding to this lecture entitled "Reconstruction in the Ozarks: Simpson Mason, William Monks, and the War that Refused to End."

Blevins, Brooks. "Reconstruction in the Ozarks: Simpson Mason, William Monks, and the War that Refused to End." The Arkansas Historical Quarterly 77.3 (2018): 175-207.

Posted by Ozarks' History at 4:12 PM No comments: