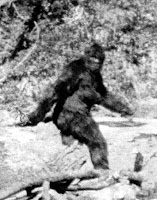 Many times as a young boy, I would hunt & trap the Ozarks hills in search of the perfect deer, coon skin, or prized fox pelt. To do this, it was required to be up before the sun’s rays glimmered over the horizon. Holding my flashlight firmly in my hand, I would walk with purpose…focused on the prize. Every so often, I could feel as if someone or something was watching me. At times I could hear footsteps mimic my own. Quickly stopping, with the hair cackled on the back of my neck, goose-bumps down my arms, and adrenalin causing my heart beat loud enough to hear my own pulse, I would grip my rifle and utter a quick prayer. I knew what it was…the elusive Ozark Sasquatch!

Of course, this was the late 1970’s. I had read the latest magazine issue that covered the most recent sightings of Aliens or Big Foot. I had seen the footage on TV. I was also a big fan of the Incredible Hulk, and I knew what radiation could do to any creature.  All this was convincing evidence to a 12 year old boy.

Though I never saw Big Foot or discovered the tracks of the Ozark Sasquatch, I knew they were intelligent enough to cover their tracks.  I just needed the obscure evidence. 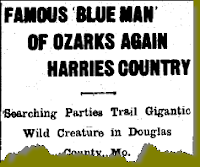 Finally, after all these years, I have exposed the documentation that confirmed my childhood speculations. Apparently, according to the following story, there had been generations of these savage beasts. I now believe I had come close many times to making an “Ozark Historical Discovery” that would put me in the Genius Book of World Records.

Though it has not happened...yet, there is still time.

I hope you enjoy reading this fascinating account & history of our own Ozark Sasquatch called the "Blue Man." All this should make Ozarks’ History a hair-raising event.

SPRINGFIELD. Mo. July 7.—News comes to this city that after an absence of four years the mysterious "Blue Man of Spring Creek" has again appeared in his old haunts and is causing great excitement in the wild and hilly country along the Big North Fork, Indian, and Spring creeks, in the eastern end of  Douglas county.

It was in the beginning of 1865 that noted Ozark rifleman and trapper, “Blue Sol” Collins, came across strange tracks in the snow along Spring Creek. He had trailed many a bear, and these trucks resembled a bear's, but this bear must surely be the largest bear in all Missouri. The imprints in the snow were longer and broader than any bear tracks Collins had seen, and along the tracks were queer markings, seemingly made by great claws.

Collins was fearless and followed the footprints, determined to slap the greatest bear in the history of the region. Hour after hour he followed the trail. He was tolling up the slope of Twin mountain when he heard a noise on the hill above him. Looking up, he was just in time to leap to one side as a huge bowlder swept past him down into the valley. Another and then another bowlder swiftly followed. When Collins had time to look closely and see what was causing the avalanche of rocks he was terrified.

Saw Gigantic Figure.
On the steep hillside above him stood a gigantic figure. An enormous man, stark naked except for a breech cloth and a shoulder piece of some animal's skin. The huge body was covered with long hair almost black in color, and as thick as that of any wild animal. On the man's feet were rude moccasins of deerskin tied with thongs of leather. The ends of these thongs had made the claw like marks in the snow.

The terrifying figure was armed with a club six or eight feet long. This he had laid aside in order that he might more readily tear the bowlders from the frozen soil. Collins was no coward, but he never denied that after one look at that fearsome figure on the hill he turned and fled.

The Ozarks were a thinly settled region fifty years ago, but several of the scattered families among the hills missed calves, sheep and hogs, and after long search found discarded hides and clean picked bones in remote crannies among the hills. Some of them, too, saw the fearsome figure slipping among the woods.

After 1865 the "wild man" disappeared and became no more than a tradition in the remote region. In 1874 he reappeared, was seen by probably a score of men, and was systematically tracked by men skilled in trailing wild animals. But all efforts to capture him were in vain.

During the next sixteen years the "Blue Man ' made several trips to his original haunts and on each trip the farmers lost some of their smaller animals. Every incursion was marked by energetic efforts to capture the strange creature now universally known as the "Blue Man of Spring Creek." Why "Blue" no one knows unless the name was given because it was "Blue Sol" Collins, who first saw him.

In 1890 It was rumored a party of searchers had the quarry so long sought, but this proved false. Evidently, however, they made it too hot for the "Wild Man," for again he disappeared. It was not until 1911 that he again appeared. This time his den was found, but he disappeared.

Not So Fat Nowadays
Six weeks ago and farmer noticed two of his lambs did not come home with the rest of the flock. He searched the hills and at last found their bloody pelts in a hollow in a remote part of the woods. The next day he saw the "Blue Man" running down a hog in the woods and since then several other farmers have seen the creature. The wild man is said to be less robust than formerly. His blue-black coat of hair now is iron gray and his limbs are not as well muscled as formerly. Nevertheless, it may be safely wagered that there is not a man among the sturdy Ozark mountaineers who would like to risk combat single-handed with the fearsome creature.

Before the Revolution, while this region was yet under the flag of France. It is said that a French Indian trader came into the Ozarks, bringing with him a beautiful Spanish woman, a native of Florida. In the region the trader abandoned the woman or sold her to the Indians. From this poor outcast descended a race of Indian-Spanish half breeds. One of these in the third or fourth generation may be the "Blue Man of Spring Creek." This was the theory of "Uncle Jerry" who settled in what is now Douglas county in 1820, and lived there until 1885.

In the course of nature the "Blue Man" cannot be expected to live much longer. Whether he ever will be caught or whether the secret of his long absences and mysterious returns will ever be solved is doubtful.