For those who read my blog, I will divert to an older history than I usually write about. But, if it were not for the story that I am about to share, there would be no Ozarks’ History.

While working in a library, I have the opportunity to see, view, and critique thousands of books. It seems over the past few years, I have been more discerning about my personal collection of books in my home.  Personally, I think some books are not worth the paper they are written on…others priceless. Therefore, my personal library at home is dwindling. I’m getting picky.

I have one book that I believe The Father in Heaven has placed in my temporary possession which is a history book of North & South America written in 1849. It is not a politically correct, dumbed-down, white-washed bleached version of history that spins events to ones liking. At times, it reveals facets of the past that we have never been told.  In its’ pages lie a wonderful chain events that prefaces the origin and reason we celebrate Thanksgiving.

I have a common affinity to this particular story I am about to share, since it was written by Thomas Robbins, D. D. who is my 5th great-grandfather. It’s funny…I have never heard this story before; I wonder why? 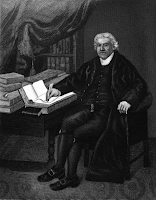 “The present year proved to be a year of suffering, in consequence to the scarcity of food. The following affecting account is given by Bradford:  ‘But by the time our corn is planted our victuals do spent, not knowing at night where to have a bite in the morning; we have neither bread nor corn for three or four months together, yet bear our wants with cheerfulness, and rest on Providence. Having but one boat left, we divide the men into several companies, six or seven each, what take their turns to go out with a net, and fish, and return not till they get some, though they be five or six days out; knowing there is nothing at home, and to return empty would be a great discouragement. When they stay long, or get but little, the rest go a digging shellfish, and thus we live the summer; only sending one or two to range the woods for deer, they get now and then one, which we divide among the company; and in the winter are helped with fowl and ground-nuts.’  It is recorded that, after a drought of six weeks, the government set apart a solemn day of humiliation and prayer, which was almost immediately followed by copious supply of rain. In the language of the chronicles of the times, it is thus spoken of:  ‘Though in the morning, when we assembled together, the heavens were clear, and the drought as like to continue as it ever was. Yet (our exercise continuing eight or nine hours) before our departure, the weather was overcast, the clouds gathered together on both sides on all sides, and, in the morning, distilled such soft, sweet, and moderate showers of rain, continuing some fourteen days, and mixed with such sweet seasonable weather, as it is hard to say, whether our withered corn or dropping affections were most quickened or revived, such was the bounty and goodness of our God.’ Soon after, in grateful acknowledgment of the blessing, a day of public thanksgiving was observed. This, by judicious historian, Thomas Robbins, D. D. is believed to be the origin of the annual thanksgiving of New England.”

Reflection:
It is commonly taught today that Thanksgiving was modeled after harvest festivals that were commonplace in Europe at the time. It is rarely, if ever known, taught that Thanksgiving is commemorated because our forefathers humbled, fasted, and prayed for the breaking of a drought. Their answer to prayer was a gentle and mild shower for 14 days off the East Coast…that did not damage crops. To me, that is miraculous.

Our ancestors knew how to be resilient and yet humble. They were tough old knots with hearts bent toward Heaven.

And to you my dear reader, are there dry places in your life? Honestly, I can see my fellow man’s parched land before I see my own wilderness. But as I pause and look at my accomplishments against my shortcomings, I fail. I know I cannot live without The Lord’s salvation, guidance, and provision.

Do I still carry my ancestor’s traditions that will increase the faith of my children and the next generation?

I ask this one request of you, dear reader. Print off this old story and share it with someone. Let’s dig out and dust off our foundations and prepare for rain.

Work Cited:
Goodrich, Charles A. Great Events in the History of North and South America. Hartfort: House & Brown, 1949.
Posted by Ozarks' History at 10:29 AM No comments:

What a Dollar Can Do.

I couldn't help it.
I just had to throw this on the Blog.
This advertisement was from an old Baxter Bulletin from 1932.
Just think about this the next time you walk into you small town mercantile...or China-Mart. 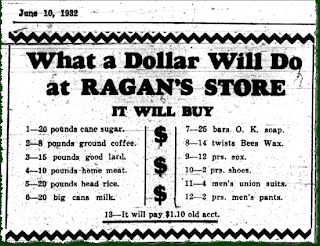 Posted by Ozarks' History at 3:48 PM No comments:

When in Trouble, Head for the Hills.

I will lift up mine eyes unto the hills, from whence cometh my help. (KJV) Psalm 121:1
The hills of the Ozarks have been my companion throughout my life. They are part of the cypher and symbols that always call me back home. It usually doesn’t take over an hour to scale its’ crags and hollers; but, they can forever capture a my mind when I'm far from home or sitting on the front porch in the evening.
In the following article, an Ozark native also considered the Ozark hills as a haven during times of national peril.

OUR WASHINGTON LETTER
Washington, March 7
The removal of the capital of the United States to the Ozark Mountains in Southwestern Missouri is the startling proposal and in a memorial introduced in the House of Representatives this week by Mr. Shartel of Missouri. The communication comes from the editor of small Missouri paper located at a microscopically undiscovered point and instructs the Representatives in Congress of the “show me” state to introduce bill for the transference of the seat of government as proposed “for sanitary, economic, and other reasons. The Honorable Mr. Elliott, who is responsible for the petition urges the change especially for sanitary reasons, suggesting that a great deal of the inefficiency and crookedness at Washington is possibly attributable to the malarial condition of the atmosphere. Furthermore, he does not like the capital located on one edge of the country, open to the attack of what he calls “the unfriendly powers of the old world” adding that if it were located in the Ozarks such an attack and the consequent destruction would be impossible. Germany might bombard Washington with her war ships, but never a city buried in the mountains of Missouri. Congressman have been quick to appreciate Mr. Elliott’s thoughtful and sympathetic fears for their health and bodily safety but at the same time they seem to prefer the depressing conditions and dangers of Washington to the attractions of Missouri.  The petition has been buried in a convenient cubby hole of the Committee, and it seems to assume that the government will continue to do business at the old stand for a few years more at least.
Work Cited:
“Our Washington Letter.”  The Bourbon News. Paris, Kentucky 26.20 (09 Mar., 1906) 3. Chronicling America. Library of Congress, Washington D. C. 1 Nov. 2010. http://chroniclingamerica.loc.gov/
Posted by Ozarks' History at 10:38 AM No comments:

Question: What was the Ozarks like in the 1870's?
Answer: Rocks & Trees
When I was a kid growing up in Ozark County, we always had a fresh cop of rocks every year to harvest out of our garden. Oh the dread of hearing dad grabbing buckets, with a readiness in his voice, in offering me the opportunity to pick up rocks. But, my respite would be at the end of the day...climbing one of my favorite trees in the back field in the evening hours and watching the setting sun.
Rocks...I did not love. Give me a tree any day.
Nevertheless, our rocks have brought attention to this area.  Not only have our rocks brought us to the international spectrum, our forests have also garnered value and beckoned as a ready resource for the Ozark Pioneer. I found this article about the Ozarks from a newspaper called The Anglo American Times, in London, Middlesex, with the date from 1874. This may show a little light and as small survey of our Ozark's History. Though the article may seem a bit dry or dull, The Ozarks had an optimistic view for the people across the pond in England.