SIR: I have the honor herewith to report my examinations of obstructions upon White River, from James Fork, in Missouri, to the foot of Buffalo Shoals, in Arkansas, a distance, by my estimate, of 194 miles.
I left Saint Louis, Missouri, on the 10th of June last, and reached Maberry’s Ferry, on the White River, June 13, at which place I obtained a small flat-boat with which to proceed down stream.
The examinations were commenced on the 21st at the mouth of James Fork. The estimated distance from this fork to Forsyth, Missouri, is fifty-two miles. This point I reached Saturday evening, June 24. This may be considered the termination of the first section. The rest of the distance to Buffalo Shoals, having been examined last year, will form a separate section.
Before entering upon the details of this report it may be well to make some general remarks.
The improvement of White River, as herewith estimated, does not embrace a true low-water channel, such as is being made upon the Osage River, but is intended to include the removal of all obstructions to navigation when there is a rise of 5 feet above low water upon the head of the principal shoals. The fall of some of these shoals is too great for an improvement at a moderate low-water stage, unless at a very great expense, which the resources of the country do not now justify. At present, a navigation which will permit steamers and other craft to ascend and descend, when there is a rise of 5 feet or over upon the shoals, is all I can now recommend as admissible in the expenditure of public funds.
Thus far I have no hesitation in saying that I believe such an improvement as herein is recommended is worthy of an appropriation to the extent of my estimate. The country, to be sure, is far from being developed, either in its agricultural or mineral resources; much of this is owing to the want of facilities for getting to market with these products when obtained, and getting supplies of salt, groceries, and other necessary articles, at a reasonably cheap rate.
The bottom-lands upon this river are not extensive; but what there are will compare favorably with any other bottom-lands along the rivers of the States.
The hills are high and the land considerably broken; still there is some very good land in the valleys and low elevations bordering the small streams, and most of the hills afford a fine range for stock.
The hills along this stream have, undoubtedly, much mineral wealth, which is yet far from being developed. Iron and lead, I judge, will be found quite abundant; other minerals, such as copper and zinc, are said to exist in many places. Upon the whole, I am of the opinion that this country, in due time, will teem with population and wealth, more from its mineral resources than from its agricultural products, which, at best, will only supply the miners and their families if such become numerous.

SECTION NO. 1 —From James Fork to Forsyth, a distance estimated at 52 miles.
We found 59 shoals on this section. My estimate of the fall at these shoals, together with the estimated fall of the pools, amounted to 89.25 feet, which is an average of 1.55 feet per mile. The water in the river, at the time we examined this section, was believed to be from 12 to 15 inches above low water.
The pools I found to be from 2 to 10 feet deep ; generally not over 6 feet; the deepest channel upon the shoals, about 15 to 18 inches. As we descended the river we found the water lessening in depth upon the shoals, so that at Forsyth it could not be over 12 inches above low water. The width of the river upon this section will average about 350 feet.
The obstructions to navigation do not materially differ from those found in a similar number of miles below Forsyth.

Names, &c., of the worst shoals in this section, with the estimated cost of their improvement.

China Bowman Shoals, No. 25.—This shoal should have a dam across the right-hand channel, estimated at a cost of $2,000.
Long Creek Shoal, No. 28.—The river divides into several channels. The right-hand ones must be closed by dams. The cost of the work here is estimated at $4,000.
First shoal above Bull Shoal, No. 41.—This shoal should be improved by a dam across left-hand channel, the cost of which I estimate at about $2,000.
Bull Shoal, No. 42.—This channel is very crooked, and should he straightened, and a wing-dam built to concentrate the water. The cost estimated at $4,000.
Jenning’s Shoals, No. 50.—A wide gravel-bar on the left. An old dam here extends too far toward the right shore, a portion of which must be removed; the other end extended to the left shore. This shoal has an estimated fall of 2.5 feet. The improvement of this shoal will cost about $5,000.
Shoal No. 52.—A brush and gravel dam required across one channel. The water here divides into nearly two equal parts. Required, a brush dam, estimated to cost $500.
Shoal No. 56.—Water spreads over a wide surface and should be concentrated by a brush and gravel dam, which is estimated to cost $500.
The seven miles upon which these shoals are situated are therefore estimated to cost $18,000. The balance of the distance the cost will be light, and may be estimated at $50 per mile, $2,250.
Total cost of fifty-two miles…………..$20,250.00
Add 50 per cent, for contingencies……..10,125.00
Grand total………………………………30,375.00

SECTION NO. 2.—From Forsyth, Missouri, to the foot of Buffalo Shoals, in the State of Arkansas, which we estimated by our run this year at one hundred and forty-two miles.

This is considerably more than was estimated last year. A part of the examination last year of this section was made when the river had risen some 4 or 5 feet, which I judge, to some extent, caused an underestimate.
I, however, am of the opinion, while last year’s run was underestimated, the estimate for this year may he too great. Actual measurements only can determine the true distance.
For the first one hundred miles, as estimated last year, I can hardly improve the figures. With 50 per cent, added to my estimate, instead of 20 which I then made for contingencies, I shall cover the difficulties suggested by your report of last year upon this work. In reviewing the river, I am satisfied that your remarks upon the difficulties to be encountered are strictly just. The estimated fall of the shoals of this section is somewhat greater than I estimated last year. The pools I now estimate at 4 inches instead of 6 inches per mile, as per last year's report. The whole fall, therefore, is slightly less than my previous estimate.
The shoals number 130 from Forsyth to the foot of Buffalo, with an aggregate fall estimated at 159.10 feet, to which add 4 inches per mile for the pools, making in all 206.43 feet, or 1.45 feet per mile. The bad shoals upon this section, which require considerable engineering skill to improve, number 12. These shoals have mostly local names, and are situated in the following order upon the miles, as numbered this year, namely: 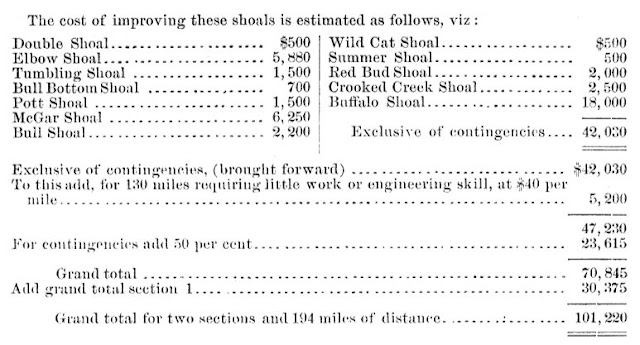 The estimate for section No. 2 varies mainly from last year’s estimate by a considerable increase of funds required for Buffalo Shoals. These shoals were examined this year carefully under favorable circumstances. The river was low and I took a level of the whole fall, which I found to be 9.5 on a distance of only one and one-fourth miles. Last year the estimate of these shoals was ten feet fall, and the length two miles. The fall this year was found to be 7.6 feet per mile, while last year the fall was 5 feet per mile. It is evident, therefore, that it would require greater skill and a greater expense to overcome the force and velocity of the water, in order to permit boats to ascend in such a moderate rise as 4 or 5 feet.


The bottom of these shoals is solid rock the whole length; there are large quantities of loose rock upon the shoals, which can be placed in dams at a low cost. These dams should be frequent, not less than 16 in number, and will contain about 500 cubic yards of stone each. The cost per yard may be set down at $1.12½ , making this item $9,000. The amount required for excavating the channel I place at the same figures as last year, viz, 3,000 cubic yards at $3 per yard, thus making the total expense of improving the shoals $18,000. Owing to the great fall on these shoals, and the limited distance from the head to the foot, I am satisfied that these shoals are now largely the greatest obstacle to an ascending navigation at moderate floods on this river. The work of improving the same should be done under the direction of a practical and scientific engineer.
I feel satisfied, therefore, in making a large increase in my estimate for this work over the amount thought sufficient, under the circumstances, by me, as you find by last year’s report.
I respectfully refer you to my last year’s report for the details of my plan for improving Elbow and McGar Shoals, which, next to Buffalo, are the most important shoals to be improved. The width of the river from Forsyth to Buffalo Shoals is fully 400 feet upon an average.
The height of the bottom-lands will average about 23 feet above low water, and the highest flood known 28 feet, the place having been pointed out to me by the citizens of Forsyth. In my report of last year I stated I had measured the water of White River, and found it to discharge 264 cubic feet per second. This measurement was made when the water was at its lowest stage. The oldest inhabitants told me they never knew this stream to be lower than it was last season. One-half of this quantity would fill a lock of 10 feet lift, 60 feet wide, and 250 feet between the gates, every 19 minutes. This would allow one-half of the water as wastage through the dam and lock gates.
Very respectfully, your obedient servant.
ALONZO LIVERMORE,


Lieutenant-Colonel U. S. Corps of Engineers.