When looking for missing pieces of history, many times the evidence seems vague. A portion of a story may be all we have, while remnants elusively hide themselves until appointed times. To this portion, a seeker awaits patiently.
This is the case concerning George Washington Jones.
George W. Jones was born to Joseph Madison Jones and Rachel Walker Jones on February 17, 1823, in Overton County, Tennessee. Georges’ wife, Elizabeth Chadwick Jones, was also born in Tennessee on January 20, 1827. George & Elizabeth were married in Dade County, Georgia April 13, 1848.
George & Elizabeth came to Baxter County from Alabama in 1853 and settled on Big Creek, about three miles south of Mountain Home, Arkansas. George purchase 80 acres according to an U. S. Land Patent dated March 1, 1855 & 40 acres on December 10th, 1859. 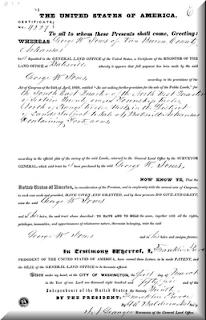 William Jones
G. A. F. Jones
A. John Jones
Thomas Jones
Lorena Jones – wife of J. B. Schoggen
During the Civil War, while George served in the Confederacy, his property was destroyed, his stock driven off, and his family was forced to move to Pineville, Izard County, Arkansas, for safety. After the War, however, he started anew on the same place, adding to his farm a groundhog threshing machine, horsepower cider mill and press.  George also had a cotton gin and water mill on Big Creek.
This sentence about a water/grist mill was something my Granny Anderson would read about in Mary Ann Messick’s book, History of Baxter County: Centennial Edition 1873-1973. This was something that caught my attention years ago. But where exactly was this grist mill on Big Creek?

Then One Day…Tada!
A little over a year ago, a patron came into the library where I work at. He proceeded to tell me about this huge round stone by his house in Big Creek. The stone looked like it was round and flat with a steel band encompassing the exterior edge.  Near the creek are traces of the spring that ran into the mill-run, which can be seen from the picture below.

Near the creek are traces of the spring that ran into the millrun.

Also, there is evidence of a dam that was once made in the creek.

The stone was finally pulled out of the creek.

Front & Profile view of the 4 foot mill stone that was pulled out of Big Creek.
Notice the steel band encompassing the stone. 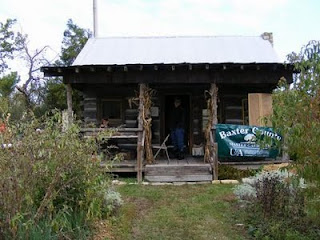 Picture of the George Washington Jones Cabin; constructed after the Civil War around 1868. Pine logs for this cabin were hauled by oxen-drawn wagons from the Ozark National Forest, south of the White River. This picture was taken October 17th, 2009, at Baxter County History Day sponsored by the Baxter County Historical & Genealogical Society. The cabin has been relocated to Rapp’s Barren at Cooper Park in Mountain Home, Arkansas. 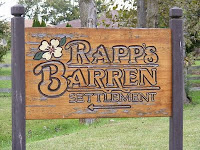 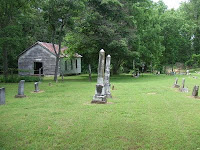 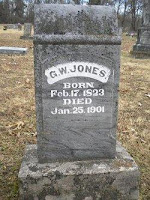 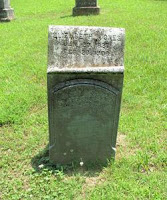 Final resting place of George Washington Jones & Elizabeth Chadwick Jones.
Photos by Vera Reeves on Find A Grave.
Looking Back.
The one thing that has always struck me in the Jones Saga has been…Tenacity.
With property destroyed, stock driven off, and a family forced to move because of the War of Northern Aggression (sorry, I couldn’t resist), this family came back and built again. They didn’t quit.
As I look back at circumstances in my own life, I look at those who have gone on before me. When I look at these times tough pioneers, I feel so small. With all their faults, flaws, and prejudice, these people are my still heroes. They were not perfect, but their faith, word, and honesty could knock the bark off a tree. They knew their place with their neighbors. Shoot…they weren’t so self-centered that knew their neighbors; and in these times, neighbors were sometimes were a mile or two away.
So I ask you Dear Reader. If circumstances have over taken you, there are those who have walked many of those lonely paths.
If you happen to meet someone in desperate straits, try reaching out a helping hand. Whether you are from the Ozarks or not, I believe we have some of that same kind of Ozark spirit in us. We all need the compassion, faith, honesty, and integrity for others as we travel through this life. Then someday, others may tell of our journeys… as a part of our Ozarks’ History.
Works Cited:
George Washington Jones Cabin.  Photo Retrieved May 2, 2011. http://www.baxtercountyhistory.org/PhotoAlbum.cfm?AlbumID=7241&PhotoID=83195.
Google Interactive Map and GPS Data: GPS Coordinates: Latitude: 36.29580, Longitude: -92.37000.
Helms, Jeff. “Big Creek Property & Millstone.” Retrieved May 2, 2011.
Jeff, Helms. Personal interview. 6 May 2011.
“Jones, George Washington.” U.S. Land Patent. Retrieved May 7, 2001.   AR0540__.486 (3 Mar.,1855) www.glorecords.gov .
“Jones, George Washington.” U.S. Land Patent. Retrieved May 7, 2001.   AR0690__.460 (12 Dec.,1859) www.glorecords.gov.
Maggie. “Jones, Elizabeth Chadwick.” Retrieved May 4, 2011. Find A Grave . http://www.findagrave.com/cgi-bin/fg.cgi?page=gr&GRid=38792948
Messick, Mary Ann, (1973). History of Baxter County: Centennial Edition 1873-1973. (400). Mountain Home Chamber of Commerce. International Graphics, Little Rock, AR.
“Oak Grove Cemetery.” Photo taken by Annette Shaw.  Retrieved May 4, 2011. Find A Grave.
“Oak Grove Cemetery Interments Named.” Find A Grave.   Retrieved May 4, 2011. Maintained by Sheila Coy. http://www.findagrave.com/cgi-bin/fg.cgi?page=cr&GRid=38793260&CRid=55425&.
Reeves, Vera. “Jones, A. John.” Retrieved May 4, 2011. Find A Grave.   http://www.findagrave.com/cgi-bin/fg.cgi?page=gr&GRid=38793260.
Reeves, Vera. “Jones, George Washington.” Retrieved May 4, 2011. Find A Grave.   http://www.findagrave.com/cgi-bin/fg.cgi?page=gr&GRid=38792871.
Posted by Ozarks' History at 9:22 AM 2 comments: