I know I have taken the above passage from the Bible out of context, but fat, lard, and grease are a few of the basic necessities and lubricants of the Ozark diet.  Many times these simple elements add the sweetness to our cooking and the richness to our culture.  Yet, all the while, they add a littlenthickening of cholesterol in our arteries.  This entry should not be gleaned as the proper diet, but it documents the way food was and is prepared in the Ozarks.  The food is always delicious but not always healthy.

This is also a small testament of how I once ate, but now I have “seen the light.”  The way I changed my eating habits was through the breaking of my stubbornness and pride.  You see, I was raised on bacon grease, ham drippings, and breakfast sausage grease. A big part of my diet was pork until 1997.  At that time, I was having serious stomach problems every time I ate pork or pork products.  I also began to study biblical dietary laws concerning what to eat and what is not considered as food.  I will not go into a deep theological debate on this issue.  But suffice to say, I believe the Good Lord in Heaven was ringing my bell, and I was obliged to answer.  Though my mind and mouth had a hard time listening, I “saw the light” and gave up pork.  Thank goodness for turkey bacon.

Nevertheless, I will now list the 4 basic gravies I was raised on in the Ozarks. In addition, there is one other main staple to make any Ozark Gravy.  It is a cast-iron skillet.  There’s something about the flavor of gravy made in a cast-iron skillet.

Red Eye Gravy
According to an old story, General Andrew Jackson, 7th President of the United States, was getting hungry for a noon meal and called for his cook over to tell him what to prepare. General Jackson was a common and rugged man that always shot his thoughts straight from the hip. The cook had been drinking “white mule” or "moonshine" corn whiskey the night before and his eyes were bloodshot and as red as fire. General Jackson took a quick look at the man and told the cook to bring him some country ham with gravy as red as his eyes. Some men nearby heard the general and from then on, ham gravy became "Red Eye Gravy."

Red eye gravy is very salty since it is made from frying up a good piece of salty ham. Fried ham will not usually render enough grease in providing the proper amount of drippings for gravy. To solve this problem, add a huge dollop or two of lard and melt it down. Now comes the magic with a little punch. Black Coffee. I can’t tell you how much but add enough. If it’s too strong, add water. For a little extra zip to the flavor to the gravy, add a little bit of crushed clove. If you are watching you salt/sodium intake, this will not help. Serve gravy over boiled new potatoes, mashed potatoes, or just soaking a piece of bread. It’s also pretty good sipping from a coffee cup.

Greasy Gravy
Greasy Gravy is pretty much like Red Eye Gravy. The main difference is that its’ composition is made of bacon grease & coffee. This goes great over hot buttermilk biscuits, twice-toasted toast, boiled eggs, or scrambled eggs with squirrel brains.

Flour Gravy
Flour Gravy is the breakfast staple of the Ozarks.  When I was growing up, I was never allowed to eat cold, boxed cereal during the week.  Hence, a weekday breakfast consisted of three choices:

If you notice the last meal, grease is a part of every item.


Warning: As you can see by the ingredients listed below, there are no exact measurements to making gravy. It is an art and skill that comes by trial and error.  If it doesn’t turn out the way you think it should, let the skillet cool, crumble up some biscuits in it, take a spoon and eat it out of the pan. Here too is some added advice.  Never let your grandmother, mom, or wife see you eating out of the skillet.

Flour Gravy is also wonderful for lunch or supper time. The only change needed is to use the grease rendered of fried chicken. This gravy is great on mashed potatoes, roles, cooked vegetables, and sliced tomatoes. 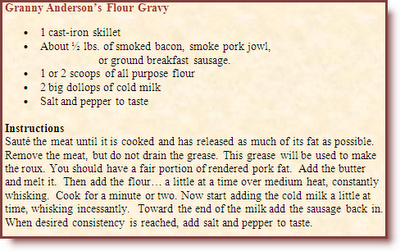 This gravy is thick, sweet, full, smooth, and chocolatey. It’s the kind of gravy that its’ remnants should not be left on the breakfast plate; it should be sopped and scraped clean with biscuits. Some people saythis gravy is nothing more than chocolate pudding, but they're wrong. When this gravy is cold, it can be used as a cake filling, but beware because it softens as it warms. Chocolate gravy is a specialty of mountain families in the Ozark Plateau, Appalachian, and Cumberland Mountains including: East Kentucky, East Tennessee, West Virginia.

What is the origin of this recipe? According to the Oxford Encyclopedia of Food and Drink in America, it is believed Spanish Louisiana had a trading network in to the Tennessee Valley Region. This trade may have introduced Mexican-style breakfast chocolate to the Appalachians, where it is called "chocolate gravy." (Another possibility is that the very old population of County mixed-race Appalachian Melungeons has preserved the dish from the sixteenth- and seventeenth-century Spanish colonies on the East Coast.)"

Chocolate gravy is something I still enjoy. If you have been a reader of any of my past blogs, you may remember my wife’s family is from the countryside of north central New York, near the Catskill Mountains. They were foreign to our southern ways of cooking and never heard of Chocolate Gravy.  Fortunately, my brother-in-law, Michael, married a young lady from Fifty-Six, Arkansas, in Stone County.  She can make Chocolate Gravy just like Granny Anderson.  My kids love going to her house for breakfast because she is known as a great cook, and her Famous Chocolate Gravy is something to talk about.  Below is a recipe for Aunt Mica’s Famous Chocolate Gravy. May  your New Year be as sweet as Chocolate Gravy.

Chocolate gravy, oh my goodness what a treat!! I am a West Virginia native w/ connections to the Melungeons.

I melt my butter in those great cast-iron skillets. Add the flour/cocoa/sugar mixture, stirring to blend. Then add abt 1/4 cup of HOT water to dissolve, slowly adding the milk, stirring constantly. Cook until bubbly and slightly thickened and as you said serve over hot biscuits.

I have to use the frozen biscuits, sadly. Everyone I know has tried to teach me how to make biscuits without success. My husband used to say he used my biscuits for gravel when he made cement!!

Now give me YEAST and I can make the best bread and rolls you ever tasted. Love home-made cresent rolls, brioche and make them from time to time just for the memories and OF COURSE, the taste.

Here is my recipe for:
ONE HOUR ROLLS - a quick and easy to make yeast bread which is also good served with chocolate gravy (and other things, too)

ONE HOUR ROLLS
Bake abt 425 degrees for 20 minutes
Makes 1- 2 dozen
Combine:
1 cup lukewarm water
1/3 cup melted shortening (butter)
1 T sugar
2 tsps salt
Add:
2 pkgs of dry yeast
pinch of ginger (ginger helps rolls rise better - gives no flavor)
Mix well.
Blend in:
1 egg
Add:
3 1/2 cups of sifted flour
Mix until dough is well blended and soft.
Rollout:
on a well floured board and fit into a greased 12 X 18 pan
Cut:
dough into 1 X 4 inch rectangles and brush with melted butter.
Let rise:
in a warm place (80 to 85 degrees) until double in bulk about 30 minutes.
Bake:
In a hot oven for 20 minutes or until rolls rise and tops are lightly browned.

Here are a couple of my websites, etc
A Melungeon mailing list that is family friendly - to join, send an e-mail to:Melungeons+subscribe@googlegroups.com

Reading the clues - an interview I gave my local paper
Genealogy research helps unravel a mystery of Appalachian medicine: http://www.wvgazette.com/News/200807200341