An early Arkansas Territorial newspaper, The Arkansas Advocate, began in 1830 to compete the other newspaper in Little Rock, the Arkansas Gazette, founded in 1819.  In its folds are wonderful glimpses of Ozark life at the time.  In the following story is a description of Izard County, Arkansas, in 1830.  Izard county was founded October 27, 1825.  At the time of publication, Izard County was larger than today, and it was one of only 3 northern counties in the Arkansas Territory.  I have culled a few map images of this region in its earlier time.  This article was penned by Mr. C. F. M. Noland.  In his narrative, one can imagine the wide expanse of our Ozarks' History. 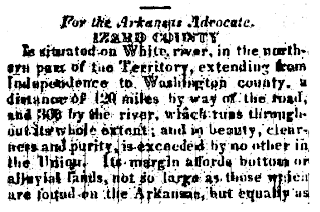 For the Arkansas Advocate.

Izard County is situated on White river in the northern part of the Territory, extending from Independence to Washington county, a distance of 120 miles by way of the road, and 300 by the river, which runs throughout its whole extent; and in beauty, clearness and purity, is exceeded by no other in the Union. Its margin affords bottom or alluvial lands, not so large as those which are found on the Arkansas, but equally as rich, and in many places, sufficiently extensive for a number of families. Unlike most large streams, the inhabitants generally reside next to the hills, for the convenience of spring water, which gushes forth from the cliffs, and in many places, set in close to the bottoms. In going from Independence County, the first settlement is on Rocky Bayou, a little stream not exceeding 15 miles in length, fed by springs which are numerous to its source. A few miles above its mouth, this creek branches out in various directions, upon which are neat little farms indicating contentment and cheerfulness; it has a population of 15 or 20 families, a saw mill and two grist mills. From this place to the Piny creeks, a distance of 15 miles, the country is poor and mountainous; here, however, at the junction of these creeks, the prospect is much enlivened by the appearance of a saw mill and grist mill, belonging to the Messrs. Livingston and Wolf. This mill is within half a mile of the river, and the pine around it is inexhaustible. Those gentlemen deserve much credit for their enterprise, and there is no doubt that their perseverance will meet with success.
From this to the next settlement, a distance of 17 miles, the land appears somewhat better; here we find another grist mill and another saw mill, both of which meet with much encouragement. Eight miles further on is a branch of White river, called the Big North Fork; it is about 80 yards in width and at least 100 miles in length; in other countries it would be called a navigable river as it now is in freshets for some distance. It is settled for 30 or 40 miles up, presents much rich bottom and a good deal of tillable upland. About 20 miles from its mouth, it breaks off into creeks, many of which upon their borders, present many inviting situations, and the country adjoining becomes for some distance level and rich. At the junction of this stream with White river, stands the Seat of Justice, Liberty; its situation is elevated and commanding; as yet, how-ever, like most of the little towns, it is not much improved; in proportions as the settlements increase so will this place, in importance. At this time it has a store, a blacksmith shop, and a good Tavern, where is to be found good cheer upon moderate terms. Opposite to the town is another store and a cotton gin nearly competed.
For 30 miles farther the hills and mountains are numerous, then for 10 miles the lands are rich and thickly settled, until we reach the Little North Fork, about 40 yards in width and 60 miles in length; here, near the mouth, is another sawmill and here too, within a short distance of the main river, is an inexhaustible mine of Iron ore, and if the reports of those who have examined it be true, of which there is no reason to doubt, it will yield to no other in richness; for it is said to be almost malleable. Wood is plenty immediately joining to it, and water power sufficient for machinery of any kind. It will yet be the source of wealth to some enterprising capitalist, for in addition to the many advantages which it presents, the iron could be shipped immediately from the works, and the counties below, bordering upon the river, would be a market calculated to take much of its labor. Above this stream we see consider-able good land, and pass Swan and Bull Creeks, and many others, all of which not only have settlements on them, but present many fine openings to the emigrant.

Forty miles farther we strike James’ Fork of White river a stream equally as large and long as the Big North Fork, The bottoms are tolerably large and in proportion as it is ascended, becomes more open until about 30 miles from the mouth a level country is readily seen really and truly inviting, fine land, the best of water and health, if it is to be found anywhere. This stream is settling fast, particularly by persons from Missouri. It has become in some measure noted for its lead mines, the ore of which is plainly perceptible to the eye across the whole bed of the stream; it is said to be very rich though it has never been regularly worked. The Indians and others occasionally run their lead from it. On the west side of the river, the prairie opens and extends as is supposed to the Rocky Mountains. There is a road from here to Washington County, and another to St. Louis, both of which are said to be a good deal traveled. The country generally above this and on the head of White river and its tributaries is very similar to that of Washington County. Heretofore, the country and its streams have been spoken of only on the north side of White river; that on the south side is far from being undeserving of notice. Until 1828 it formed a part of the Cherokee nation, and was always deemed the most inviting part of Izard County.
The lands upon the river have been described, but some distance back along the line of Independence, is a large tract called the Rich Woods, said to be well watered and almost large enough for a county. There are but a few families settled here, all of whom speak in the highest terms of the adjacent lands. It is so lately that this part of Izard has been open for settlement, that its advantages and good lands are almost unknown; it is well therefore, to pass on to Buffalo creek, a distance of 50 miles, though in doing so a number of small creeks must be passed unnoticed.

Buffalo creek is upward of 40 miles in length, its bottoms are tolerable good and will give room to a considerable settlement; near its mouth is a large salt petre cave, which a few years since, was extensively worked. The next stream is Crooked creek, which has long had a high reputation; it is 60 miles long and though inclined to be poor and rocky near its mouth, yet a few miles up a beautiful country is found, and it continues up to its head; its bottoms are large, and the uplands, generally undulating, rich as can be desired; springs are so numerous here that they are discovered in every direction. The land continues good to Bear creek. The character of this little stream is, generally speaking, similar to that of Crooked creek. These two creeks are beginning to present farms not only immediately upon the margin, but in the open country, which breaks off level, occasionally giving a view of small prairie sufficiently large for good farms.
King river empties into White river, and is worthy of attention to those who are fond of good spring water, as well as good land both of which can be found upon and near it without much trouble. Fifteen miles above is the War Eagle, one of the main forks of White river, but supposed to be in Washington county. It is no doubt navigable for flat boats for some distance in high water. For many miles up it presents very large bodies of land well adapted to agricultural purposes, occasionally intersected with small prairies, similar in richness and appearance to the lands in Washington county. Four miles above this is Richland creek. Its name is truly applicable, for the land is rich in every direction, and continues so with scarcely an intermission for 20 miles, to Washington Courthouse.

In giving a description of Izard County, it is perhaps, going too near the Washington C. H. [Court House], but as it is located on White river, a full description of its tributaries, however superficial, should be given. It is a rare case in Izard County, to find a farmer without a first-rate spring, which no doubt adds very much to the health of the inhabitants. It has increased by slowly in population from the fact that it was a great measure unknown, and until within two years, the part situated on the south side of the river, belonged to the Indians. It is now, however, increasing considerably in numbers, and no doubt will continue to do so in proportion as it becomes better known. It is but lately that the inhabitants have devoted any part of their attention to the cultivation of cotton, yet this year they will probably export nearly 100 bales.

The inhabitants of Izard, like all the other counties bordering on White river, receive their supplies in kneel boats; they too, call loudly for a steam-boat to ascend the river, for they would be prepared, like every other family in the north, to buy their groceries and such other articles as they might need; and a full load upon such terms as could be afforded to be sold at, would occasion no delay, and give a handsome freight and commission. It would scarcely be believed, that six counties, with a population of 7 or 8,000 could, sending off near a 1,000 bales of cotton, besides peltries, furs, etc., and importing 250 tons of merchandise, have never been visited by a single steam-boat. One trip would soon induce another, for the harvest awaiting the coming of the first is truly a rich one. Then, too, emigrants desirous of settling on the waters of White river, would have an opportunity of ascending with less labor and expense. Many parts of Izard County are similar to Washington, the farmers are kind and hospitable, and provisions cheap and plenty.