I have had people ask me why I love researching history & genealogy so much. To answer that question, let me give an analogy concerning Dance of Marriage.

May I Have this Dance?
I have been married over 22 years. In this time, I have discovered that it is not a short dance, but it's a lifetime of rhythmic moves that affects future generations. This dance will encompass many seasons of change. All these must be done in unison. Many times the unseen conductor brings both partners into new varieties of music that have never been experienced or practiced before. This dance requires continual cooperation from both partners. Since we are human, there are obvious mistakes that will cause each partner to question their companion’s gracefulness in recovery and stamina in the marathon. In every flaw we see in our partner, we must see the glory that awaits them at the end of this season of their life or the end of their life’s journey. We must forgive the faults of each other that have entangled themselves into our character like briers and thistles. These faults can cause scars, not only to ourselves, but to their dance partner. Lastly, we must not harbor a laundry list of offenses, ridicule and disdain. But, we must be a continual cleansing tide of forgiveness who continually offers a hand up.

In all these things, we must mature in order to look back and glean a lifetime of lessons. There is no way I could have learned these intricate steps of the dance called “Marriage” without my wonderful dance partner, my wife.

Back to History
In the observation of history, whether it be local, regional, or world, we too must look at every flaw with the glorious expectation of what is still possible from the lessons we have observed. In every fault, we must see every scar of the past as a glorious marker in time in which tragedy leads to a new birth, awakening, or renaissance. In every offense, we must vow to release those whom we deem as unworthy, desperadoes, tyrants, or villains. In all these things, history reveals hidden objects and obsessions that were one concealed in many hearts of the past and our own. As we peer through these doors, we may open the skeletons in our closets and expose our own weakness. When we do, we will look back and glean a lifetime of lessons.

Whether it is the Ozarks’ History or some other account, may we all bow to our partner and learn the lessons of a life’s story that untimely affects us all.

Posted by Ozarks' History at 5:10 PM No comments:

History of Baxter County by 1891

Working in local history, one can easily get trapped in having a narrow point of view. I have met some people who truly believed that many segments of the Ozarks in the past were remote & inbreed. Nevertheless, if the truth be known, no person, family, community, or county is exclusive unto itself…even in the Ozarks. I recently ran across an old newspaper no longer published in Baxter County, Arkansas, called the The Baxter County Citizen from July 16th, 1891. The following is a transcript of a beautiful narrative that is not only about Baxter County history, but it was a testament from generations past and of a view of history that was treasured 120 years ago that is a part of our Ozarks’ History. 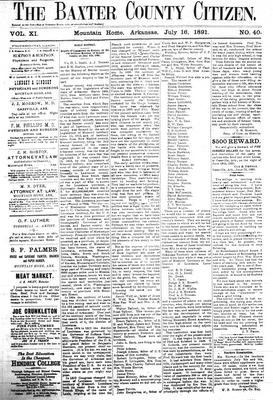 Elisha Smothers.
Sidney Stratton.
Green Toney.
William Wesley.
Mart Green.
James Littlefield.
James James.
James Duggins.
John Painter.
David Jackson.
N. G. Tracy.
Rev. V. B. Tate.
R. W. Tate.
William Casinger.
T. B. Goforth.
Wiley Brewer.
Robert Carson.
Henry Lance.
John Fletcher.
Hiram Wells.
Denis Hawkins.
Noah Baker.
Perry Tucker.
Charles Finley, sr.
Dick Hutchinson.
William Rimm.
John Jinkins.
Joel Siner.
John McGee.
Stephen Norris.
Dr. Frizelle.
T. T. Travis.
Dale McCormick.
David Robertson.
Allen Bagwell.
Col. Morgan.
J. T. McCrackin.
Daniel Anglin.
There are a number of others we would like to name who are inseparably connected with our county’s history. They are among the names to which we will be led to the greatest generation, when we abstract titles to the lands of this county and when we search those names in ancient deeds, we will be reminded of those who reclaimed our country from the wilderness. Most of these lived here from fifty to sixty years ago.
Many of them were citizens of Arkansas Territory and some were here while it was yet a part of Missouri Territory or the District of Louisiana. Later came:
Col. R. D. Casey
Col. O. L. Dodd
Dr. Dodd.
T. Y. Casey.
Judge J. S. Russell.
Dr. J. M. Casey.
Dr, J. H. P. Wallis.
Prof. J. S. Howard.
Prof. A. J. Truman.
Hugh Calhoun.
And a number of others we could mention, who, though not Among the first settlers, were here before the late war, and assisted materially in the development of the county, and especially in establishing Mountain Home Academy, the first high school in the territory now in this and many adjoining counties.
That institution was built near the sight of the present academy. It was begun in the winter of 1858 and finished in 1859. T. B. Goforth, our present county surveyor, was the contractor. It was built by subscriptions, as few of our inhabitants then were. Prof. Howard was the first teacher. It had scholars from Batesville, Jacksonport and many other places and in the country for 100 mile around. It increased the value of real estate 300 to 400 percent, during the short time it was in existence before the war. It was destroyed by fire Dec. 12, 1864. It was rebuilt after the war, principally through the efforts of its former founders. Prof. Truman and Mrs. Truman et. al., conducted the school for many years, during which time it was only high school, in this section for many leagues around.
Time forbids that we should enter into details of the heroic effort of teachers and students in those days, when many young men and women were battling against odds for education, or to give a list of those now filling responsible stations in life, who were by their own efforts educated here, but hope some future meeting of the association, their names will be read, in the presence of the rising generation, together with a full history of Mountain Home school from the close of the war to the present, that the youth of to-day, hearing of and appreciating the self-denial, sacrifice and earnest effort of teachers and student of former times, may profit by their example.
Respectfully submitted.
Z. M. Horton,
Secy. Of Com on History.
Works Cited:
“Baxter County Citizen: Early History.” The Baxter Bulletin 8.28 (10 July, 1969) 1. Baxter County Microfilm Archive. Donald W. Reynolds Library, Mountain Home, AR. 15 Nov., 2010.