Blind Ambition in the Ozarks

If the odds are stacked against you, never say, “ Never.”

Long Horseback TRIPS
BY BLIND BROTHERS
One Rides 36 Miles With Only, His Dog
for Guide. - All Travel
Alone.
Marshall, Ark. -  Riding on horseback thirty-six miles from Boyle, Stone County, to Marshall, by way of Big Flat, James Albert Rorie, who has boon blind since five years old, arrived at Frank Rainbolt’s near Marshall, a few days ago.
He came all the way with no one to guide him except his faithful dog. He chained his dog to the bit of his horse’s bridle. The dog started out in the direction that Mr. Rorie pointed. When the dog came to the forks of a road he would trot back and forth until Mr. Rorie motioned either to the left or to the right, and then they would proceed on their journey.
There are three brothers in this family who are blind, the other two being Henry and John.  They go to any place they wish' with no person to accompany them. Last year James Albert traveled over, Boone, Marion and Searcy counties. For a number of years they have operated a broom factory near McPherson, Baxter county.
Work Cited:
“Long Horseback Trips for Blind Brothers.”  Daily Leader.183 (25June, 1915) 2.  Access Newspaper Archive.   Donald W. Reynolds Library, Mountain Home, AR. 1 Oct. 2010.
Posted by Ozarks' History at 8:08 AM No comments:

Ozark County Refugees in the Time of Civil War

Thankful.
Even when tough times come our way, we can always be thankful for what we have.  Taking a look back in to our Ozarks' History, there was a time of loss & migration, in looking for safety from Ozark County during the Civil War.
And for today..
Though we may see things on the horizon...
May we never crumble to the point of such division and political correctness that we turn against our brother.
May we always hold our faith resolute to our Father's guiding hand.
May we always bend our will to His and give to our brother in need.


He is more than Providence, as he is intricately working in our lives & this nation.
North or South...Young or Old...Rich or Poor...Unborn or Born.


May we never come to this point of mass hysteria in our nation as to have... An Affecting Sight.

May we throw ourselves at His Mercy, while it is still call Today.


Wouldn't that be An Affecting Sight?

I am respectfully yours,
Vincent 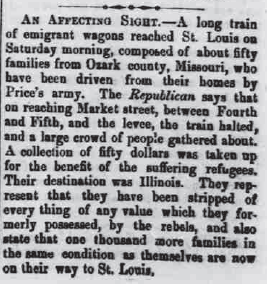 An Affecting  Sight.
A long train of emigrant wagons reached St. Louis on Saturday morning, composed of about fifty families from Ozark county, Missouri, who have been driven from their homes by Price's army. The Republican says that on reaching Market street, between Fourth and Fifth, and the levee, the train halted, and a large crowd of people gathered about. A collection of fifty dollars was taken up for the benefit of the suffering refugees. Their destination was Illinois. They represent that they have been stripped of everything of any value which they formerly  possessed by the rebels, and also state that one thousand families in the same condition as themselves are now on their way to St. Louis.
Work Cited:
“An Affecting  Sight.” The Smoky Hill and Republican Union  1.14(26 Dec., 1861) 1. Chronicling America. Library of Congress, Washington D. C. 1 Oct. 2010. http://chroniclingamerica.loc.gov
Posted by Ozarks' History at 5:29 PM No comments:

Why is it called "The Ozarks?"

How did the Ozarks get its’ name?

It seems I get this question about 3 or 4 times a month from visitors to the area. Well, to answer that question, I have found an old article from 1932.

Confronted with many questions of varied nature the Jefferson city Chamber of Commerce which has become adept at answering queries, almost met a Waterloo Thursday when an elderly couple, en route home from a vacation trip at, the Lake of the Ozarks, stopped here and asked what the meaning of “Ozarks" happened to be. After a search, which for a while proved  discouraging, the chamber found a report by Miss Jeffries in a Lake of Ozarks publication which explained that, the derivation of Ozarks was from the French "aux arcx," which means "with bows and archery", and not from the Indian as has been popularly supposed. "When the explorations of the French carried them into this j section, the only known inhabitants were Qaw Paw Indians, a branch of the Sioux. They migrated here from the Ohio and Illinois rivers when the white man came," Miss Jeffries said in her explanation. "The French established the first trading post, Aux Arcx in this bow and arrow country. Later the Spanish came questing for hidden gold. Many of their hidden treasures, repose no doubt, beneath the Lake waters of the new inland sea." The local Chamber of Commerce invites anyone having a different explanation for "Ozarks", to write and tell them about it.