It is the glory of God to conceal a thing: but the honour of kings is to search out a matter. Proverbs 25:2 (KJV)
I have always had an affinity for exploring caves & finding old mines in the Ozarks.  I am always looking for what is hidden. There’s always something to be newly discovered in the next holler, over the ridge, or up the next creek. In the following article from 1893, explorers were searching for treasure while dealing with ghostly haunts.
This seems to be an old theme for people in the past...of our Ozarks’ History. 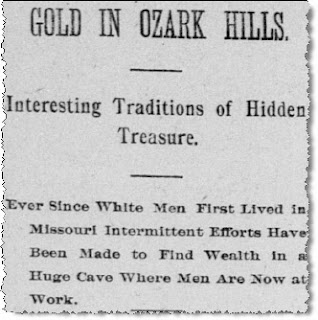