A Place of Significance

A small unobtrusive, jagged field-stone or a sunken plot of ground in a cemetery may not always conjure vivid memories of the past. A vacant plot of ground may seem like a safe place to step as we try to respectfully hopscotch across a cemetery to the familiar tombstone of our destination. Yet underneath the soles of our feet, lie the remains that once housed a soul with ambitions, heartaches, and dreams.
These are the thoughts running through my mind as I visit the Walnut Hill Cemetery in Cotter, Arkansas. It is this cemetery that holds the grave-site of Sam and Alice Mason. While standing at their gravesides, I determined to piece together the historical fragments of their lives.

In the past, I have briefly written about Samuel Mason and his wife Mary “Alice” Ridgeway Mason, the only African-American family living in Cotter in 1908. Now, I will connect the remaining fragments of Sam and Alice's life and their connection to the Ozarks.

Mary “Alice” Ridgeway Mason
As a small child, Alice was born in slavery and raised near Black Oak in Weakley County, Tennessee.
According to the 1860 U. S. Slave Census, William Alexander "W. A." Ridgeway housed two young and unnamed, black children in Weakly County, Tennessee. Most likely, Alice is the 1st female, slave child, and the boy is probably her brother, Joseph Ridgeway:
By 1870, Alice and her brother, Joseph, were working as servants on the W. A. Ridgeway farm in Tennessee. 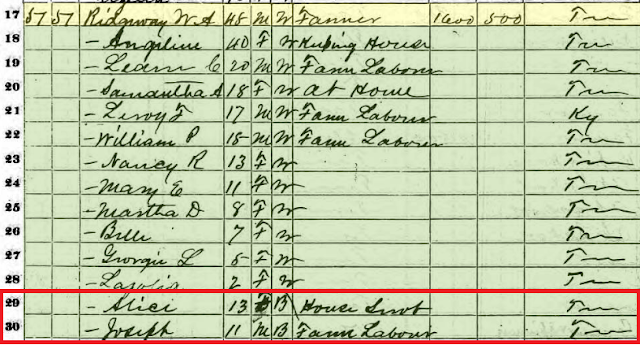 Eventually, in the 1870s, the Ridgeways moved to the Ozarks. In 1880, Alice and Joseph are working as servants on a farm for Thomas Ridgeway, son of W. A. Ridgeway, in Sharp County, Arkansas.

Samuel "Sam" Mason was about 5 or 6 years older than Alice, and he was also born into slavery in Georgia about 1855. By 1860, Sam was living in La Crosse, Izard County, Arkansas, and he grew up on the Samuel Jefferson Mason farm. In a bit of historical conjecture, the 1860 Slave Census most likely reflects Sam and maybe his mother at age 23 listed below:

23-year-old Female Black (Sam's Mother?)
14-year-old Female Black
4-year-old Male Black (Sam?)
In the 1860 U. S. Census, Samuel Jefferson Mason is listed as born in 1818, and he is from Jackson County, Tennessee. Eventually, Samuel Jefferson Mason moves to Izard County, Arkansas, after the fall harvest in 1860. After arriving in Izard County with his household, Mr. Masson serves as a Lt. Colonel in the Confederacy, 14th Arkansas Infantry (McCarvers). Lt. Col., Jefferson trained & bivouacked his troops in Pocahontas, Arkansas, and eventually moved his troops into middle Tennessee. This is the same region Lt. Col. Mason had left two years prior. in December of 1862 Lt. Col. Mason fought in the Battle of Stones River, just north of Murfreesboro, Tennessee. In the battle, Mason was killed, and he and he is buried among the 24,645 causalities of that bloody engagement in his home state of Tennessee.
At the moment, I have not found Sam Mason, the Freeman, listed in Izard county in 1870. But in 1880, Sam is boarding with the Garner family in the La Crosse Township, in Izard County. According to the U. S. Census, Sam Mason is listed as a farm laborer, and he can read and write.

As Charley grew up, his father, Sam, worked as a carpenter and a shoemaker. Sometime after 1901, and the building of the railroad on the White River, Sam moved his family to Cotter, Arkansas. The week of July the 17th was a memorable time for the Mason family. Many families were experiencing difficulty and financial distress was still on the minds of many people with the U.S. Bank Panic in the prior year of October 1907 which led to a nationwide economic depression. Many people were searching for extra income, and some were using the White River as a resource. Sam Mason was no different as he culled for mussels along the banks of the White River, and he discovered a substantial-sized pearl. Sam proved himself an avid pearl hunter on the banks of the White River. 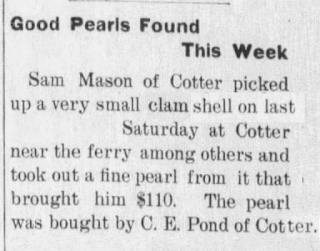 The following day, town ladies prepared Alice's body for burial and a procession made its way to the Walnut Hill Cemetery, and Alice was laid to rest.

Sam remained in Cotter and his son, Charley, age 18.  The next year, in 1909, Sam and Charley move to Tulsa, Oklahoma. 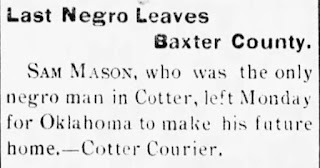 Baxter Bulletin
Mountain Home, Arkansas
17 Dec 1909, Fri  •  Page 4
In the following year, the 1910 Census records Charley living in Tulsa, Oklahoma, renting a room, and working as a hod carrier for a construction company. Strangely though, Sam is missing from the 1910 Census & the Tulsa City Directory. 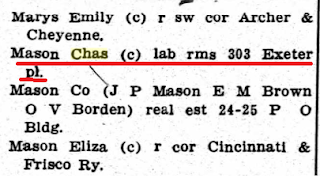 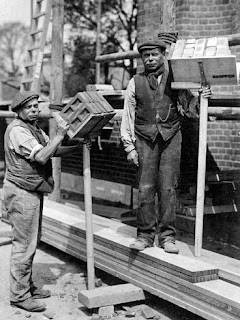 The Occupation of a Brick Hod
Sam Mason returned to Baxter County and the White River Region to live. We do not know the why or the reasoning behind his decision. In 1918, we find Sam is doing well according to a Baxter County Farm Demonstration Survey, and he is known for feasting on the White River's bounty. 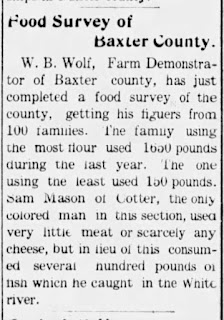 Baxter Bulletin
Mountain Home, Arkansas
February 22, 1918 · Page 1
Eventually, Charlie persuaded his father, Sam, to move to Tulsa and live with him and his wife, Wilma. 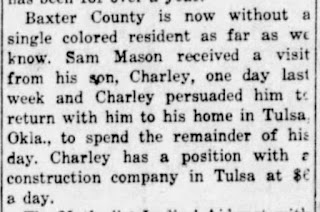 Baxter Bulletin
Mountain Home, Arkansas
March 19, 1920  •  Page 1
During World War I, Charlie registered for the draft. On his registration card, we can see Sam is still living with Charlie and his daughter-in-law at 206 North Frankfort in Tulsa, Oklahoma. Once World War I commenced, Charlie was called into active duty, and he was deployed with Company A of the 809th Pioneer Infantry and served in France. 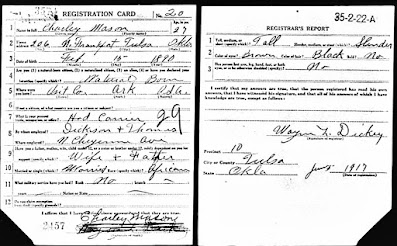 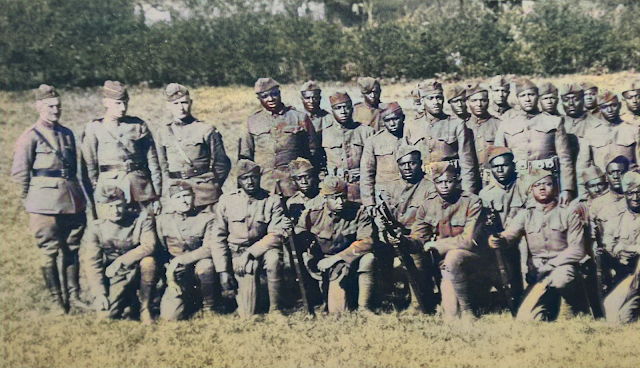 After Charlie served his term in the Army during World War I, he returned to Tulsa, Oklahoma. These next few years would be troubling and pivotal years for the Mason family while living in Tulsa. It was during this time the Tulsa Race Riots commenced. On May 31 to June 1, 1921, White residents attacked Black residents and destroyed homes and businesses of the Greenwood District in Tulsa, Oklahoma. There were as many as 300 deaths in the mayhem violence.

The Mason family from Baxter County lived in the Greenwood District of Tulsa during the Race Riots. Their address: 114 N. Greenwood Street in Tulsa. 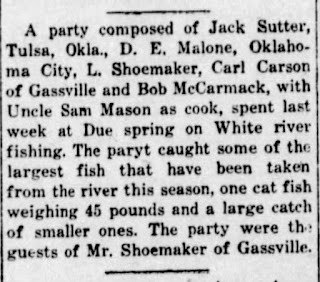 Baxter Bulletin
Mountain Home, Arkansas
Fri, Aug 12, 1921 · Page 1
There are still remnants of the Mason family's lives I have not pieced together yet. Nevertheless, the pieces that remain are beginning to shine a light on their journey, hardships, and joys. As a historian, I have collected these small fragments over the years, and I thought it would be appropriate to tell as much of the story as I know. I have discovered as I research, I do not have all the facts, but others can join the course alongside me. I am still looking for Charley's burial place and more pieces of his life. If anyone has any more information on the Mason's, please post below in the comments. 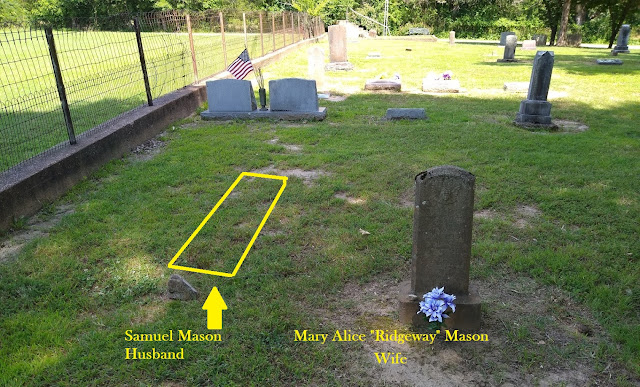 A History of the Ozarks, Volume 3: The Ozarkers 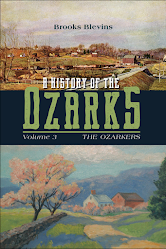 Remembering Ella: A 1912 Murder and Mystery in the Arkansas Ozarks - Boone County, Arkansas