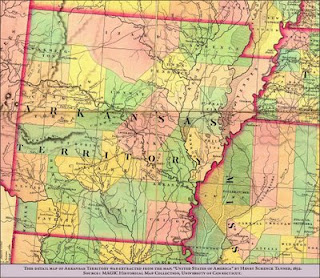 One of the most gifted men to put the Ozarks on the map was a man named H. S. Tanner. Henry Schenck Tanner(1786-1858), cartographer and statistical geographer, was born in New York. He established his well-known publishing company in Philadelphia. Trained as an engraver, he was endowed the the combination of scientific and artistic ability that spells a true cartographer. Tanner is best known for his New American Atlas, published in five parts from 1818 to 1823, with a last edition published in 1839. He died in New York in 1858.

To finance this endeavor, he was willing to make a deal and have people invest in his abilities before a map was ever produced. Hence, a proposal was made. Place a subscription for $10.00 and a map will be mailed sometime in the future. Tanner first made the announcement in Philadelphia, PA, July 10, 1818 through 1823. 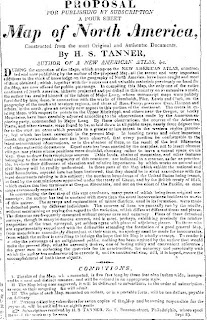 This is one of the advertisments placed in the Missouri Republican out of , on Wednesday, January 01, 1823, Page 5. I have the trancribed the text below.


Map of North America Constructed from the most original and Authentic Documents BY H. S. TANNER AUTHOR OF A NEW AMERICAN ATLAS, &c.

During the execution of the Maps, which compose the NEW AMERICAN ATLAS, constructed and now published by the author of the proposed Map, all recent and very important additions to the stock of knowledge on the geography of North America, have been sought and most often obtained; which together with the numerous and valuable materials previously on hand for the Map, are now offered for public patronage. In compiling this Map, the only one in the entire continent of North America, hitherto projected and published in this country on an extensive a scale, the author has availed himself of the labors of Major Long, whose manuscript maps were politely furnished by him; these, in connection with the works of Humboldt, Pike, Lewis and Clark, on the geography of the south and western regions, and those of Ross, Perry, governor Cass, Harmon and others in the north, give an entirely new aspect to this portion of the continent. The errors in existing Maps, with respects to points of the Upper Mississippi, and others near Oregon, or Rocky Mountains, have been carefully adjusted according to the observations made by the American exploring party, commanded by Major Long. By these observations, the sources of the Arkansas, Platte, and other streams, were found to be, as lain down in all public maps, nearly three degrees too far to the west, an error which prevails to a greater or less extent in t he western region generally, but has been corrected in the present Map. In locating towns and other important points, the greatest possible care has been observed, that every position be conformable to the latest astronomical observations, or in the absence of these, to the result of the best itineraries and other authentic documents. Equal care has been exerted by the compiler, not to insert obscure villages, nor places whose positions were doubtful, choosing rather to leave a vacant space on his Map, than to draw from suspicious sources. Table lands , chains of mountains, and other features belonging to the natural geography of this continent, are indicated in a manner, as far as practicable, to show their differences of elevation and relative importance, by which works on natural and civil history will be readily understood. In those parts of the Map which exhibit national and local boundaries, especial care has been bestowed, that they should be in strict accordance with the legal documents relating to this subject; the northern boundaries of the United States being traced, as fixed by the commissioners appointed under the treaty of Ghent, and by the British treaty of 1818, which makes this line terminates at Oregon Mountains, and not on the coast of the Pacific, as most maps erroneously represent it.

In constructing the first map of this vast continent, many parts of which being from the original manuscripts, the author has had to contend with more than the usual inconvenience incident to works of this nature. The surveys and explorations of minor districts, used in its formation, were made in detached parts, by different individuals. The courses of line are generally run by the needle without ascertaining or paying due regard to the variation, which differs at different times and places. The distances are frequently measured without proper care and accuracy. Plans of these detached surveys, though in many instances correct, and in most, perhaps, exhibiting precisely the relative proportion to the tract surveyed, yet seldom agree with the plans of adjoining places. To these who are experimentally acquainted with their difficulties attending the formation of a good general Map from materials so exceedingly discordant in their nature, no apology need be made for incurious from which the author is unwilling to indulge the hope that this Map is wholly exempt. To render it worthy the patronage of an enlightened public, nothing being omitted by the author that would make the present Map, what he earnestly desires, one of lasting utility and convenient reference the great care in collecting the materials for its construction, the accuracy and perspicuity with which the author has endeavored to execute it, and its convenient size, will, it is hoped, ensure the accomplishment of both these objects.

CONDITIONS
I. The size of the Map, when mounted, is five feet long by three feet nine inches wide, is engraved in a neat and distinct manner, and will be colored in appropriate style.

II. The Map now being engraved, it will be delivered to subscribers, in the order of subscription as soon as their mounting &c. will admit.

III. The price of each map, mounted on rollers, or in a portable form, will be ten dollars, payable on delivery.

IV. Persons collecting subscribers for seven copies of the map and becoming responsible for the payment, will be entitled to an eighth gratis.

Subscriptions received by H. S. TANNER, No S, Sanson-street, Philadelphia, where specimens of the work may be seen.

Below are newspaper ads for different modes of transporation in 1905 in Baxter County. The ads were taken from the Cotter Courier in Cotter, Arkansas.

Click on the ads to see a larger picture. 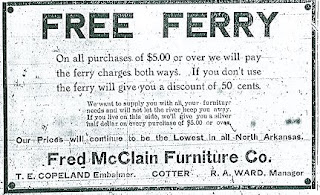 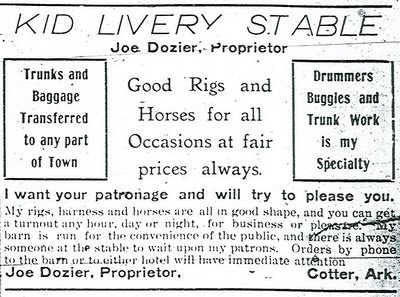 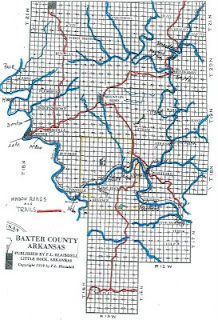 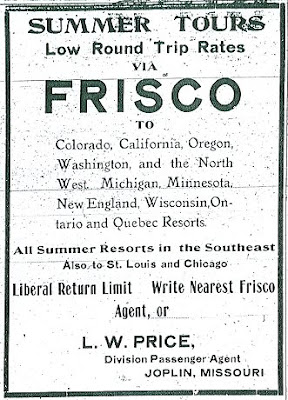 Transportation to and from via Railroad:

Posted by Ozarks' History at 4:31 PM No comments: 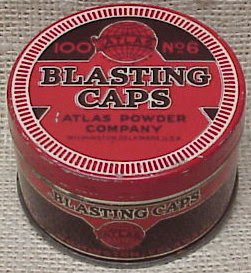 Mining in was a spin off from the progress of mining and prospecting in the neighboring . In contrast, to the chagrin of the professional mining companies, local citizens were purchasing cases of dynamite and starting their own mining ventures. Not all of the miners in were mining via shafts and tunnels; but, they were also strip-mining on cedar glades, rock outcroppings, creek bottoms, middle of fields, or blasting off portions of sheared bluffs. There were reports of small creeks and fords being blocked due to avalanches due to the process of blasting.

Advertisements can be found in the local paper, The Baxter Bulletin, in 1901 -1908, in which they were urging people to purchase 30-40 acres of land to insure their good fortune of either doing their own mining or sell to an established mining company. Steam drilling came to the Pigeon Creek area in Baxter County by the Kimberly Mining & Milling Company of Chicago, Illinois, on January, 1902, when the company purchased 600 acres in the area.

Advertisements were also in local papers lauding the ease of traveling from , , to , in a record time of 22 hours via train and then stagecoach. By 1901, had 154 mines registered within its’ borders in 10 districts.

The following are districts and mines registered in as of December 1, 1901. 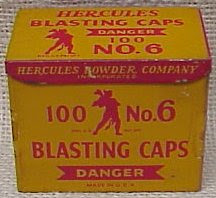 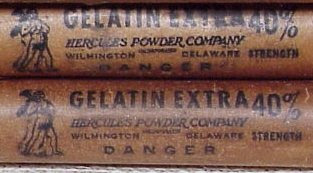 The following named mining companies own property in :

The following is a careful conservative estimate of ore on the dump in various mining districts in at this time (Dec. 1, 1901).

The best way to reach this country is by Frisco Railroad to , ; thence by stage to , where good rigs can be obtained to go to any point desired. Daily fast stages ply between West Plains and Mountain Home, making it possible to reach Mountain Home from or in twenty hours. All prominent mines of are within twenty-five miles of Mountain Home, thus saving from ten to twenty miles over other points.