This is a Working Document.

Below are newspaper articles & surveys of the White River from 1824 - 1831.  I have transcribed all articles as published. Grammar & spelling are true to the time era.

Distressing Calamity - Last week we received the unpleasant intelligence, that an uncommonly high and sudden rise of White river, and some of its tributary streams, took place during the early part of this month, which has been particularly destructive and disastrous in its effects, on the property of the citizens of that section of our Territory. The water, we have been informed, rose in some places, from 10 to 15 feet higher than it has ever been known before. A great number of plantations have been inundated and laid waste - and the fences, and in some instances the houses entirely swept off, together with corn, fodder, &c.  &c. The number of cattle, and stock of every description, which has been drowned, is almost incredible; in some instances persons owning large stocks, have lost nearly, the whole, and few have escaped without some loss.
In this general calamity, we regret to learn, that the flourishing little town of Batesville has not escaped. It has been nearly inundated. At the tavern house of Charles Kelly, Esq. the water rose so as to cover the first floor, and the family was obliged to retire to the second story for safety. At Col. Boswell’s store, the water was up to the top of his counter; and a small warehouse, in which he had a considerable quantity of peltries, &c. was carried entirely off by the current, together with its contents. Col. B's loss, we understand, is at the least calculation, from two to three thousand dollars.
In consequence of the unusual high stage of White river, there was no crossing at either of the ferries in the neighborhood of Batesville, during neat two weeks previous to the 15th inst. This accounts for the failure of the mail from that quarter.
The Arkansas Gazette
Arkansas Post, Arkansas
Tue, Jan. 27, 1824 · Page 3 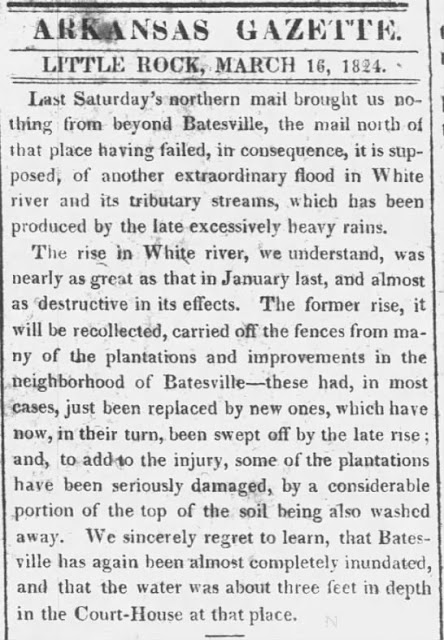 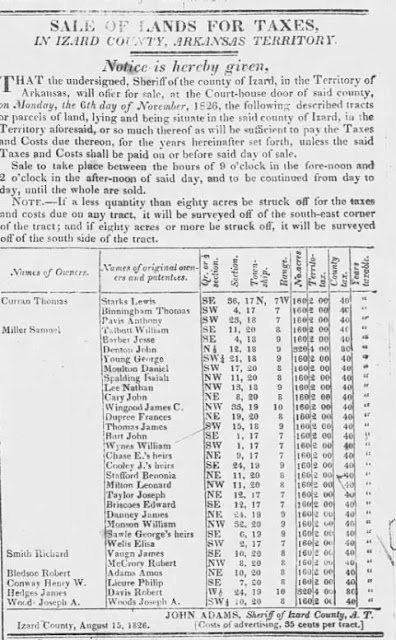 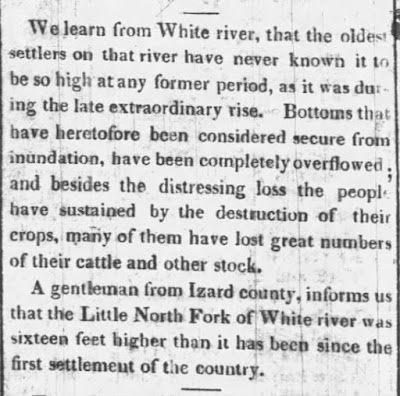 We learn from White river, that the oldest settlers on that river have never known it to be so high at any former period, as during the late extraordinary rise. Bottoms that have heretofore been considered secure from inundation, have been completely overflowed; and besides the distressing loss the people have sustained by the destruction of their crops, many of them have lost great numbers of their cattle and other stock.


A gentlemen from Izard county, informs us that the Little North Fork of White river was sixteen feet higher than it has been since the first settlement of the country.

For the Arkansas Advocate.